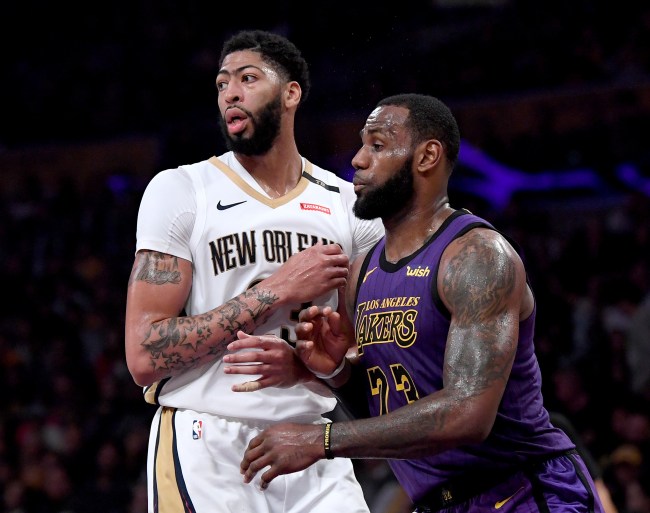 The Los Angeles Lakers have the single-most important offseason in their rich history coming up. That’s not to oversell or dramatize things, but it’s the absolute truth. After signing LeBron James to a four-year deal last summer, all the Lakers did was bomb in the biggest way possible, putting together a roster that didn’t fit with the four-time league MVPs skillset, forced to play inexperienced guys because of injuries, created dysfunction from within, completely F’ed up the handling of the Anthony Davis trade rumors and, oh yeah, at the end of it all, saw their President of Basketball Operations, Magic Johnson, abruptly resign without letting anyone know. What a total mess.

While there’s been a lot of speculation about the Los Angeles Lakers’ plans this summer — which, obviously, include going after some of the top free-agents on the market like Kevin Durant, Kawhi Leonard, Kyrie Irving and Klay Thompson, among others — the biggest elephant in the room is that Anthony Davis fellow, because, as we heard back during the NBA Trade Deadline, the All-Star forward prefers to play in Los Angeles alongside James. Will it happen? Maybe. If it happens, though, is anyone’s guess.

One guy who gets paid to guess things like this is ESPN’s Bobby Marks, a former NBA executive who used to work in the Brooklyn Nets’ front office who’s now the front office insider for the Worldwide Leader. Penning a piece for ESPN.com the other day, Marks broke down exactly what the Los Angeles Lakers should be willing to part with in order to get Anthony Davis from the New Orleans Pelicans, so here’s what he suggests the team does, per NESN.

Here’s what Marks wrote about the Lakers’ pursuit of Davis: Because the Lakers are using cap space as a buffer, their room would be reduced from $36 million to $21 million. Despite the eliminated max slot, the Lakers roster would consist of James, Davis, Josh Hart, Brandon Ingram, Moritz Wagner, Isaac Bonga and $27 million in room to build out the roster in free agency. That cap space would only increase to $30 million if James and Davis are all that’s left on the team.

So, according to Bobby Marks, the Los Angeles Lakers will be giving up Kyle Kuzma, Lonzo Ball, this year’s first-round pick (which has the chance of being a top-10 pick) and a 2021 unprotected first-rounder. That seems pretty fair to get Anthony Davis — who’s set to become a free-agent in the summer of 2020, so there’s no guarantee that he re-ups with the Lakers. That said, there’s no way the franchise would do that sort of trade without an agreement that the big man would re-sign, or, better yet, just do a sign-and-trade to complete the deal.

Remember, reports from earlier this year suggested the Pelicans were just messing with the Los Angeles Lakers in their pursuit of Davis, all in hopes of messing up team chemistry — which worked, according to Kuzma himself. With new leadership in the front office for both the Lakers and Pelicans, we’ll see how things might go this time around, and if Anthony Davis is destined to become a Los Angeles Laker after all.