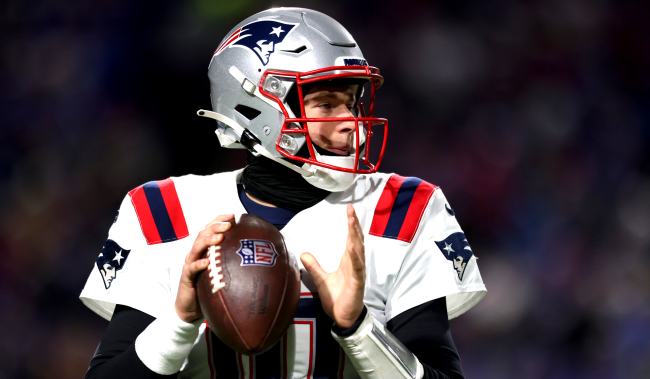 With temperatures below freezing and wind gusts of up to 50 MPH, it would have been understandable if a quarterback like Mac Jones wanted to bundle up a little bit more than usual Monday night in Buffalo.

In fact the wind was so fierce that the opening kickoff in the Patriots and Bills game went deep into … the stands.

The opening kickoff went INTO the stands 😧

The wind is no joke.

Mac Jones was DEALING in the 1st half 😂 pic.twitter.com/L0WvR4BXxe

During the game, it was widely reported (including later by us), that Mac Jones was keeping warm during the game by using a trick that was handed down to him by former Patriots quarterback Tom Brady: a SCUBA suit.

Heck, even former Patriots lineman Rich Ohrnberger said that’s Jones was wearing one because of Brady.

Part of the reason why it’s important to have a veteran in the room. pic.twitter.com/xNq5Ryx7bi

Seems like a reasonable assumption considering Tom Brady has a history of wearing a SCUBA suit in ice cold weather conditions.

Tom Brady, once again wearing the scuba suit under his jersey, takes the field for warmups. pic.twitter.com/kLygXe7HRv

And because of this…

I have never seen snow 😳

Just one problem: that assumption was wrong.

On Wednesday, Mac Jones was asked if he was wearing a SCUBA suit during the Bills game.

“No. I just had my normal dress on,” Jones replied. “I’ve been listening to Brian [Hoyer]’s advice and all that. You have to get what you have to get on and go out there and play. You want to be warm. Like I said, it’s a learning experience. But at the end of the day, none of that stuff matters. You’ve just got to go out and play what you’re comfortable in.

“Some guys go out there with no sleeves and this and that and I think it’s just a personal preference. You want to stay warm as much as you can. Like I said, it’s going to be a learning experience and there will be plenty more games like that.”