No Fans? No Problem: Here Are 5 Ways To Make Sports As Electric As Ever When There’s Not A Spectator In Sight 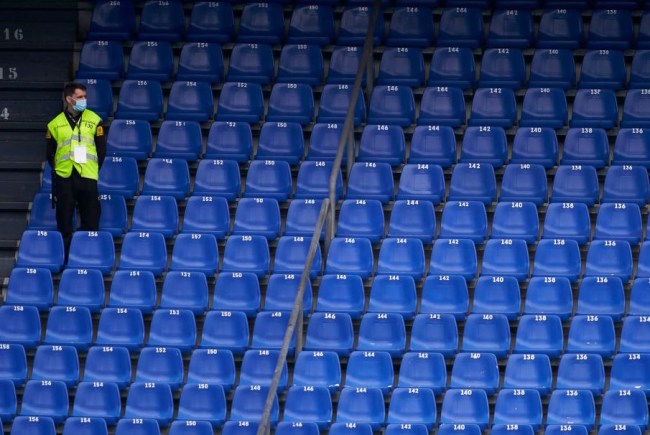 There’s nothing many people could’ve used more over the past few months than having some sports to distract them, and even though the reason we had such an insatiable craving in the first place was because of the catalyst that brought athletics to a virtual standstill, let’s not think too hard about that. We have enough mental stress to deal with as it is.

Stress makes you do weird things, and in my case, this means spending a ton of time plotting ways to exact revenge on Rudy Gobert, wondering why anyone watches ESPN while I’m watching ESPN, and trying to figure out if I found unemployment a little too enjoyable.

Thankfully, sports are slowly but surely coming back—or at least they’re trying to. The biggest leagues have gone to great lengths to figure out how to give fans what they want while protecting their own people from a thing nobody expected. Every commissioner insists “safety” is the top priority but it feels like that’s the word their personal autocorrect deploys whenever they say “money.”

One of my biggest issues is watching leagues pulling a muscle patting themselves on the back for promoting social distancing while players prepare for games where those guidelines will get absolutely defenestrated. As John Harbaugh pointed out, these measures are basically useless in a game that revolves around powerful hugs, and even though Lance Stephenson is no longer around to blow on people, playing defense normally requires you to be less than six feet away from an opponent.
I should stress I’m not trying to entirely discount the steps that are being taken to keep people healthy. There’s definitely a financial incentive to make sure entire teams, superstars, and other players (in that order) don’t get sick, but I also think that everyone in charge seems to genuinely believe they’re taking the necessary precautions.

Are they? I guess we’ll find out on this season of Game of Corona.

However, you can’t talk about financial incentives without talking about the people historically responsible for a sizeable chunk of revenue: fans. There won’t be any spectators inside the NBA bubble in Orlando and it appears the NHL will follow suit, while the MLB is letting teams decide between real people or photorealistic cutouts. The NFL is also deferring to franchises under the rumored precondition that all attendees sign a waiver taking any and all responsibility for their possible death. Yikes.

The majority of Americans say they plan to hold off on attending any games until a vaccine is developed but there is still a significant chunk that’d be more than happy to shoulder the risk—many who whom love nothing more than painting their hairy chests and wearing enough makeup to make a rodeo clown look normal. They will not be happy sitting on their couches alone at home being mocked by the seats they could be occupying. Hell, they might stop watching entirely.

Countries that gave enough of a shit to stop the spread as quickly as possible were lucky enough to make sports a thing again relatively quickly and have taken a few different approaches to address the fan issue, like the robot mannequins that were harnessed in Taiwan. In South Korea, baseball stadiums have populated the bleachers with stuffed animals and the country’s biggest soccer league has replaced chants with banners featuring supportive messages. Similar signs were hoisted for Bundesliga games in Germany, which went one step further by experimenting with fake crowd noise, which has transformed into a fairly divisive issue.

Now, I admit there’s a chance some of my suggestions could be just as controversial, but I decided to do a little bit of brainstorming and dreamed up a few ways that venues hosting games without fans can experiment with to compensate for their absence. It might be impossible to replicate the traditional gameday experience, but that doesn’t mean we can’t try to make it as enjoyable as possible.

So, I’ll admit this isn’t an entirely original idea, as Joe Buck revealed Fox was exploring the possibility of inserting fake fans into the stands during NFL games and have fake noise armed and ready to deploy in the event of a play that garners the kind of reaction that can be detected on a seismograph.

It makes sense. Once viewers at home see fake people in the stadium on their television, they’ll buy into the idea that they’re actually watching a thrilling sold-out game. With a convincing enough atmosphere, they’ll be so invested that they’ll forget those fans are only marginally more realistic than those populating the stands in Madden, frequently defying the laws of science by moving through each other like ghosts.

“But what about the money, Jake?” you say. “Fake fans will cost money so how will this help make money?” I’m glad you asked.

What word does corporate America adore more than any other collection of letters in the history of written language? That’s right: “synergy.”

For example, Disney has around 1,239,020 different pieces of intellectual property on its hands and could probably go an entire NFL season populating stadiums for games on ESPN and ABC without using the same character more than once. It’d also make Sunday Night Baseball more enjoyable, because who wants to watch a bunch of rich guys sitting behind home plate when you could tune in to see Homer Simpson crushing beers next to some of the blue things from Avatar while all of the rats from Ratatouille chow down on Cracker Jacks?

Other networks might not be able to flex like the House of Mouse, but it’d still be a great opportunity to get some of that marketing budget money from studios trying to promote an upcoming movie or shill that sitcom that’s going to get canceled after six episodes without forcing Jim Nantz to act like he’s excited about it.

2. Have A Laugh Track

I swear that this is the last thing I’ll talk about that our old friend Joe Buck has already addressed, as he jokingly responded that he’d be down to have a laugh track incorporated into broadcasts under the condition it’s the same one used in The Brady Bunch (which missed a golden opportunity to deploy some hearty guffaws when Marcia got drilled in the nose by a football).

Only if it’s from The Brady Bunch. If Sherwood Schwartz signs off on it I’m good. https://t.co/IdSXMyhAAN

Laugh tracks have largely faded away since then but they’re inextricably linked with some of the biggest sitcoms of all-time. Do you know what helped make those shows become as big as they are? That’s right: a laugh track. Would we even remember Seinfeld or Friends if there was no audience to remind us that the thing we’re watching is funny? That’s part of the reason I’ve held off on binging laughless shows like The Office and Breaking Bad: I’m scared I won’t know when I’m enjoying them.

We already know sports fans love laughing at the misfortune of others as evidenced by the existence of SportsCenter’s “Not Top 10” and ubiquity of infomercials for VHS tapes of blooper compilations in the 1990s that I’d assume were a multitrillion-dollar industry.

Those videos eschewed fake chuckles for zany music but I think the former is going to be your best bet during a time when the world could really use some laughter. An error in the outfield leads to guys chasing the ball around like a couple of Keystone Kops?  Throw in a laugh track. Russell Westbrook goes up for a monster jam and somehow misses the rim entirely? Laugh track. An NHL player tries to check someone by the boards but ends up launching himself straight into the glass? Laugh track—then a quick cut to commercial when it becomes clear he’s injured and a sincere apology when action resumes.

Genius, simple, and cost-effective? This seems like a no-brainer.

The NHL’s viewership numbers leave plenty to be desired compared to other leagues but there is one particular aspect of hockey those organizations would do well to borrow if they wanted to help boost their own ratings: some good, old-fashioned fighting.

There are people out there who believe players dropping their gloves on the ice is an archaic practice that should be removed from the game but I, on the other hand, think the real solution here is to add it to more sports.

Players are already fighting when a referee calls for a jump ball so why not just swallow the whistle for a bit and let them work it out for themselves? MLB has attempted to improve the accuracy of umpires behind the plate, but what better way to hold them accountable than to eliminate the “Hold me back” posturing and giving players and managers the green light to solve their differences via their fists.

How does this relate to a lack of fans in the stands? Well, in theory, people will become so engrossed in the fights and end up paying so much attention to the broadcasts looking for signs of another one unfolding that they’ll forget about the attendance thing entirely.

If you ask someone what their favorite song is, they’re probably not going to respond by saying, “Um, music? I am not a fan.” Sure, everyone has different tastes, but when it comes to sports, I think most people want some kind of soundtrack to the game they’re watching—as long as it’s not “Remember the Name.” When you consider that was the song of choice for every single highlight video posted on YouTube between 2006 and 2008, it’s safe to say we don’t need any more sports footage with Fort Minor in the background.

The best part? You can pump up the volume to a point where you couldn’t even hear if the nonexistent crowd was cheering if you wanted to.

Also, I assume major leagues and television networks don’t have to stress too much about licensing fees, but if cost ends up being an issue, there are plenty of royalty-free tunes to pick from on YouTube, ranging from “Creepy Clown Scene Background Instrumental” to “Chill Sounds By the Sea.” It might not be ideal, but it’s always good to have options.

Prior to a few weeks ago, I had no idea that it was possible to complain about there being too many fireworks. I guess I can understand if you’re pissed at your neighbors for treating 2 A.M. on a Wednesday in June like the Fourth of July, but there’s no such thing as “too much” when it comes to sports.

Don’t hold back. Set fireworks off between every pitch, rebound, two-yard gain up the middle, and fundamentally sound tape-to-tape pass. People miss sports. Every moment in every game deserves to be celebrated now. Is this feasible in arenas? Who cares! With so many things going on in the world, there is no way people will remember that launching fireworks indoors may not be the safest idea.

It might not be cheap but it’s the most effective way to keep things exciting. Imagine a literal explosion every time a batter strikes out or a defender makes a tackle. Hell, the tackle doesn’t even have to be good. If the play is dragging on too long, launch some fireworks to raise the stakes. Every fan will be on the edge of their seats in the safety of their homes.

If you are still concerned that empty stadiums will make sporting events less exciting, I suggest you reread this article as well as send it to a smarter friend and ask them to explain it to you. These ideas will transform sports forever and will make them the most exciting spectacle we could ever hope to imagine.