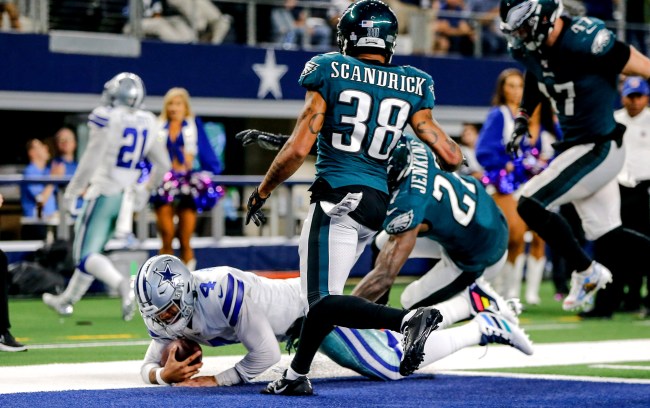 In case you missed it, Orlando Scandrick, the man who made $1 million in 2018 for playing a grand total of zero plays for the Washington Redskins, went scorched earth on the Eagles after the team cut him on Monday.

Several of the harshest criticisms Scandrick leveled at the Eagles during his Friday monrning appearance on FS1’s Undisputed were directed at general manager Howie Roseman and safety Malcolm Jenkins.

Among the criticisms involved Scandrick calling out Jenkins for not being a good captain and being a selfish teammate.

When asked on Friday to comment on what Scandrick had to say about him and the Eagles, Jenkins was pretty unequivocal.

“I could give two shits about people who aren’t here,” said Jenkins when asked about Scandrick, adding, “For us to move on as a team, we can’t have motherf**kers like that in the room.”

Jenkins also told the assembled media, “For us, being in this market, you know, obviously you guys love to write stories when things are on fire. We lose a game? The house is burning down.”

The topper, however, was when Jenkins was asked about Scandrick claiming there are accountability issues within the Eagles.

“How long was he here?” Jenkins replied.

The answer is three weeks, so yeah, perhaps Scandrick was speaking a bit out of turn when he put down Jenkins and the team he’s played for, and made three Pro Bowls for, over the last five-plus seasons.

UPDATE: The Eagles just posted this video of Scandrick telling Jenkins what a great player he is during a game. Very subtle, Philly.