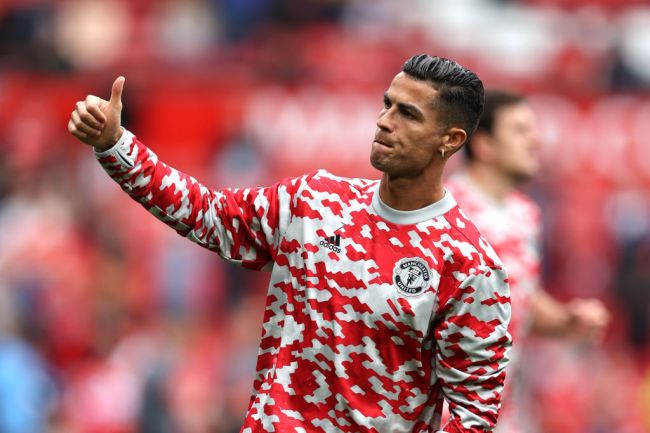 It goes without saying that Cristiano Ronaldo’s return to Man United was going to impact the club immediately, and in a countless number of ways. We saw that on the pitch right away in his first game since his move over from Juventus as he scored twice in his team’s 4-1 win over Newcastle.

Ronaldo has also already had an effect on his teammates eating habits.

According to goalkeeper Lee Grant, Man United is scared to eat dessert and junk food around Ronaldo.

“Usually on a Friday night you’ve got a few cheat stuff out,” Grant told TalkSPORT. “You’ve got some apple crumble or you’ve got a bit of brownie and cream or what not.

“I tell you now, not one player touched the apple crumble and custard, not one player went up for that brownie because everybody was sat down and one of the lads said to me: ‘What has Cristiano got on his plate?’

“So we were having a little [look] at what he has got and obviously it is the cleanest, most healthy plate you can imagine.

“And it just cracked me up how not one single player dared get up and have that junk food that was laid out.”

It’s no secret that Ronaldo follows a rather strict diet. Anyone with eyes can see that the 36-year-old treats his body like a literal temple, but it is hilarious that his teammates are now scared to grab a brownie just because Ronaldo doesn’t eat dessert.

According to ESPNFC, the Ronaldo eats up to six meals and take five naps in a single “typical” day. Superstar athletes that are worth well-over $100 million are awarded the luxury of taking five naps a day. He also hates fizzy drinks like Coca-Cola, he made that clear during a recent press conference.

Ronaldo’s diet typically consists of chicken, eggs, olives, and fish, plus it must be cooked in coconut oil, according to Business Insider. It is worth noting that he does reportedly start his days with ham and cheese, but that’s about the only ‘normal’ meal he consumes during a day.