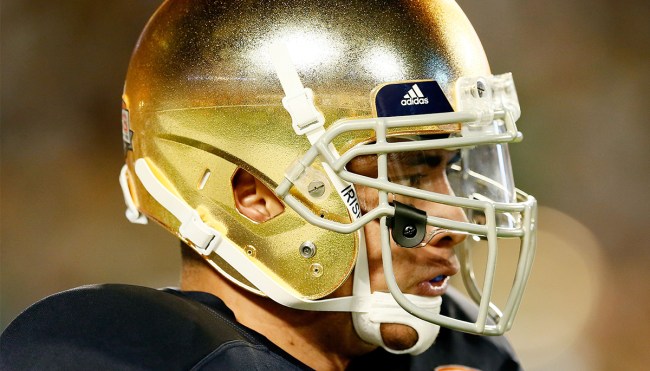 It’s been close to a decade since the college football world rallied around Notre Dame linebacker Manti Te’o after the All-American suffered a virtually unfathomable personal tragedy when his grandmother and girlfriend both passed away on the same day just two weeks into his senior season in 2012.

The only thing more unthinkable than that tragedy was what unfolded the following January courtesy of a Deadspin article that asserted the girlfriend in question didn’t actually exist, a claim that was supported by a mountain of evidence that proved Te’o had actually been catfished by someone masquerading as a Stanford student named Lennay Kekua.

I’d say it’s hard to appreciate just how wild that revelation was unless you watched the saga unfold in real time, but as someone who did exactly that, I still find it difficult to grasp the sheer magnitude of a story that Te’o largely attempted to put behind him before embarking on an injury-plagued NFL career that came to an end in 2020.

It’s hard to blame Te’o for wanting to distance himself from the hoax—one that not only defined his legacy but arguably overshadowed everything he was able to achieve on the football field. However, the fact that he attempted to move on to the next chapter in his life as quickly as he did meant many curious (and borderline voyeuristic) observers were left with a number of questions that have gone unanswered for close to ten years.

That will likely change now that Netflix has released Untold: The Girlfriend Who Didn’t Exist, a documentary that marks the first time Te’o has sat down for an extended period of time to address what went down when he was in college.

We got some insight into why it took him as long as it did to agree to dive into the details when he stopped by CBS Mornings, where he revealed Jay-Z inadvertently convinced him to finally address the issue when he went to a concert in 2017 (the segment in question kicks off around the 1:45 mark in the following video).

Here’s what he had to say via TMZ:

“Cam Jordan, with the Saints, took a bunch of us teammates to a Jay-Z concert.

And at that concert, Jay-Z opens up with saying these words: ‘You cannot heal what you don’t reveal.’ And it may have been just some random words to everybody, but for me, at that time, it hit me like a ton of bricks.

In order for me to kind of heal from this, I needed to reveal it.”

It’s not as random as you think when you consider the lyrics he cited are from “Kill Jay Z” off of 4:44, the 2017 album where the rapper candidly addressed some of his own relationship issues after Beyoncé aired a heaping load of their dirty laundry by alluding to her husband’s rumored infidelity on Lemonade.