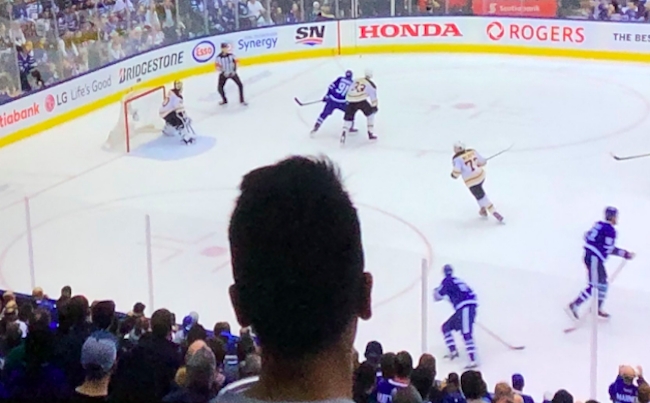 The Bruins headed into Easter Sunday facing elimination at the hands of the Toronto Maple Leafs, who took to the ice in the sixth game of their first-round playoff matchup hoping to win their first playoff series against Boston since 1959 and overcome the curse Drake cast on them earlier in the series.

The Bruins had been largely outplayed heading into the game but managed to summon up an energy they hadn’t seen since game two and had a 3-1 lead in the third period before Toronto managed to net a goal to bring them within one with over 15 minutes remaining and set us all up for one hell of a finish.

From that point on, momentum was largely on the Leafs’ side and the contest kicked into high gear as Toronto repeatedly pushed into their offensive zone in search of an equalizer. Unfortunately, some fans who wanted to watch the blitz ran into a bit of a problem.

With around five minutes remaining in the game, it appeared NBC’s main camera feed cut out and they were forced to switch to another angle, which normally wouldn’t have been a problem if it wasn’t for the giant head of a fan that took up a sizeable chunk of the screen.

Watching the Boston Toronto hockey game and literally all I can see is the back of somebody’s head. NBC: needs to get their act together right now.

really loving the nbc coverage of the back of this guy's head. riveting. pic.twitter.com/FeRTjhA6vx

A guy with the largest head in the history of mankind is standing directly in front of the camera for the NBC Sports feed of this Boston and Toronto game. And I don't think he even realizes it.

The best camera angle NBC has is the back of this guys head? Cool station.

at least NBC is providing a realistic experience of watching this game by showing the back of some dude’s head for the last ten minutes instead of the ice! pic.twitter.com/xAqIQgdd5k

NBC would figure out the issue in time to allow fans to see Brad Marchand all but put the game away with an empty-netter to bring the series back to Boston for a seventh game, but after the game, the dude’s giant head was the biggest topic of discussion—and the inspiration for a brand new meme.

That’s what we call making the best out of a bad situation.