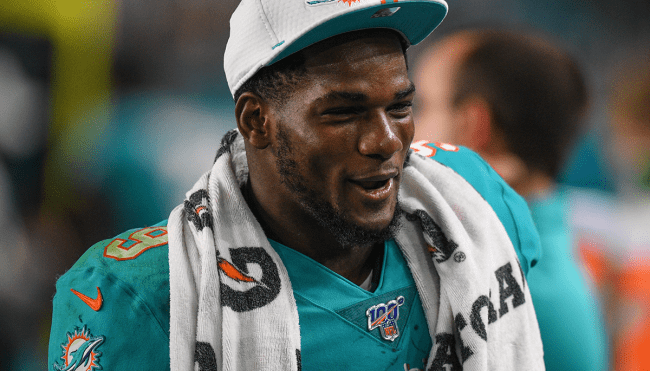 There’s a good chance you’re not intimately familiar with Mark Walton, who played running back for the Miami Hurricanes before being drafted by the Bengals in 2018.

His brief stint in Cincinnati came to an end less than a year after he entered the NFL, as he was released by the team when he was arrested on three separate occasions in a three-month span in the wake of his rookie season. While he did manage to earn a spot on the Dolphins roster shortly after, he found himself without a home yet again when he was cut after being arrested yet again in November 2019.

Walton had already been suspended four games prior to that incident and was hit with another eight-game ban in 2020 before being reinstated by the league at the start of this year. However, it took him less than a month to get back to his old ways, as he was once again hauled off to jail when police were called to a Pizza Hut in Miami in January where he attempted to break a window after beefing with employees before beating up his cousin when he attempted to intervene.

On Monday, TMZ released footage it obtained that was captured outside the restaurant where a heated Walton claimed one of the employees called him a racial slur. His cousin can be seen attempting to diffuse the situation before being assaulted by Walton, which led to the former player being detained.

Things then escalated very quickly when a handcuffed Walton announces he has to pee and proceeds to do exactly that while sitting on the curb.

Walton was ultimately charged with two misdemeanors but it appears he’s reached a deal to avoid any jail time. You have to hope he’ll be able to turn things around, but if history is any indication, it’s hard to think he’ll stay out of trouble for long.