Making A Case For, And Against, Masters Favorites To Win The Green Jacket 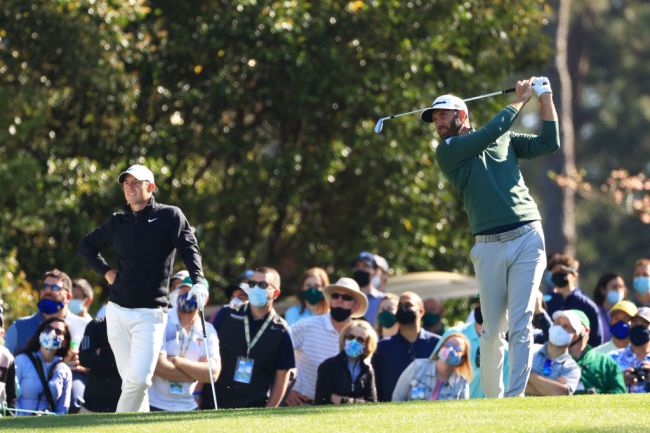 So, who is going to win the 2021 Masters? That’s the question on every golf fan’s mind heading into the greatest four-day stretch in golf. Most circle the favorites in the field at Augusta National, and rightly so. It’s the year’s first major, it’s one of the strongest fields in all of golf, and the course tests every facet of a player’s game.

As per usual, there is no shortage of great storylines to keep a close eye on heading into the week. How the favorites in the field will do is a storyline each and every year, so let’s look at the Top 10 favorites this week and look at why they will win, or won’t win, the 85th edition of the Masters.

Why He’ll Win The Masters: Did you see what this man did to Augusta National in November? Sure, the course is going to be playing much more difficult in its normal scheduled slot in April, but they are calling for some rain early in the week. If conditions are soft early on, Johnson is one of those players that could take advantage and basically force the field to play catch-up over the weekend. DJ’s worst finish in his last five starts at Augusta is a T-10 in 208. He finished runner-up in 2019 before earning the green jacket in November.

Why He Won’t Win The Masters: Jack Nicklaus, Nick Faldo, and Tiger Woods are the only three players to ever win the Masters back-to-back years. Does DJ have the ability to join that elite bunch? Sure, but he’s certainly going against history. Johnson hasn’t had his best stuff as of late having gone three straight starts without a Top 25 finish, plus, the putter has been ice-cold this season as he ranks 149th on Tour in strokes gained: putting heading into the week.

Why He’ll Win The Masters: DeChambeau is in great form heading into the week with a win at the Arnold Palmer Invitational and a T-3 finish at The Players last month. The possibility of softer conditions does nothing but help his game too as he can really shorten the golf course with his length off the tee, more so than anyone else in the field will be able to. If, and it’s a sizable if, some version of Winged Foot Bryson or Bay Hill Bryson shows up, he should be right there come Sunday afternoon.

Why He Won’t Win The Masters: He hasn’t been able to figure Augusta National out yet, and this could be yet another year the course gets the best of him. DeChambeau’s best finish in his four starts at the Masters came in 2016 when he finished T-21 as an amateur.

Why He’ll Win The Masters: Rahm winning a major has to happen sooner rather than later, right? He’s been close over the last three years at Augusta having not finished worse than T-9. Rahm has played well over the past couple of months with a T-5 finish at the Genesis Invitational and a T-9 at The Players. How Rahm wins this week is finding some sort of form with the putter. It all comes down to the putter for Rahm, if the flat stick gets hot, Rahm will be battling for his first major championship on Sunday.

Why He Won’t Win The Masters: It’s true for every player in the field, but if the putter goes cold, then Rahm won’t have a shot at winning. He’s ranked 120th on the Tour in strokes gained: putting heading into the week. It’s also worth noting that Rahm and his wife welcomed their first child only a few days ago. Maybe his mind isn’t all-in on golf this week, instead, it’s with baby boy Kepa Cahill. That could also be an advantage tho, too. Rahm now possesses dad strength.

Why He’ll Win The Masters: Coming off of his first win in nearly four years last week, Jordan Spieth could be the hottest player in the field. It’s no secret that he loves Augusta National and feels very comfortable here. Spieth just has to avoid the big miss and the big numbers, if he can do that, the magic of this place intertwined with him should be there yet again this week. Also, if conditions are firm and fast, that only benefits Spieth. He’s been there, done that at the Masters and if his form holds true he should be a threat over the weekend.

Why He Won’t Win The Masters: While he did win the Valero Texas Open last week, he repeatedly told the media that he didn’t have his best stuff during the tournament. That could be Spieth being humble, or it’s him honestly not feeling totally comfortable over certain shots. If he’s not comfortable out there, especially with a few tee shots around the property, he could fade fast.

Why He’ll Win The Masters: While his buddy Jordan Spieth may be the hottest player heading into the week, JT isn’t far behind. Having won The Players last month, he’s certainly in form and should carry a lot of confidence into the week. Thomas has arguably been the best ball-striker on the planet since the calendar turned to 2021. From tee to green, Thomas has been excellent this season. Thomas has enjoyed himself at Augusta each time he’s teed it up having improved his finishing position every year. JT has gone T-39, T-22, T-17, T-12, and finished solo fourth during November’s Masters. It’s impossible not to like JT’s chances this week.

Why He Won’t Win The Masters: The only knock against Thomas’ game heading into the week is his accuracy off the tee. This shouldn’t be too much of a problem at Augusta, however, with a lack of rough and no real trouble on a majority of the holes on the property. He’ll need to hit quality tee shots with the driver on Par 5’s, if he fails to do that, he, and anyone else that fails to do so, won’t have a shot at winning this weekend.

Why He’ll Win The Masters: Nobody is talking about Rory heading into the week, so maybe this is when he finally breaks through for the career grand slam. McIlroy recently began working with Pete Cowen to get his swing back in order and if the two have pieced together a consistent swing, specifically with the big stick in hand, then McIlroy has a good a shot as anyone to win the green jacket. He’s been close a number of times through his career, without all of the pressure on him to do so this year, maybe that frees him up a bit.

Why He Won’t Win The Masters: McIlroy has been fighting the big miss, particularly the big left miss, which is a no-no at Augusta National. We saw him struggle mightily at The Players with an opening-round 79 and a missed cut. If that Rory shows up, he may not even make it to the weekend.

Why He’ll Win The Masters: Cantlay is another player flying a bit under the radar heading into the week, which is surprising given just how well his game fits Augusta National. He’s one of the most consistent players on the planet in every aspect of his game ranking sixth in strokes gained: total heading into the week. If we see the ball-striking Cantlay we saw early this year when he recorded Top 3 finishes at The American Express and AT&T Pebble Beach Pro-Am then Cantlay could be walking off the 18th green on Sunday a major champion.

Why He Won’t Win The Masters: Cantlay did not have his best stuff at last month’s Players having missed the cut and followed that up with a poor performance at the WGC Match Play event in Austin. He isn’t necessarily trending in the right direction heading into the week results-wise, but statistically, all the numbers are there. Three putts have plagued him a bit this year. If those show up this week, his chances are slim.

Why He’ll Win The Masters: From a statistical standpoint, Schauffele checks all the boxes. He can work the ball off the tee, he’s an elite ball-striker, and his putting has been excellent all season long. In order to win, Schauffele has to simply avoid trouble and be confident that his consistent game shows up this week. That seems far too simple, but for Schauffele, that’s all you need to ask for.

Why He Won’t Win The Masters: We haven’t seen much from Schauffele as of late. He missed the cut at The Players and finished T-39 at the WGC at Concession. The results simply haven’t been there for him. He hasn’t been bad by any means, but he also hasn’t been great. If that trend continues then it won’t be too eventful of a week for the X-man.

Why He’ll Win The Masters: It’s a major championship. Brooks Koepka likes major championships. He’s fresh off of knee surgery, but prior to undergoing an operation, he was playing great golf with a win at the Waste Management and a T-2 at the WGC at Concession. He’s gone T-2 and T-7 in his last two starts at Augusta National and has been dominant tee-to-green here over the years as well, a win here seems to be on the horizon. Since 2017, Koepka has led or co-led a major for 13 total rounds, five more than anyone else in golf. If Koepka can flip that major championship switch we’ve seen him do so often, and the knee holds up, it could be his week.

Why He Won’t Win The Masters: The knee doesn’t hold up. After dislocating his right knee cap and going under the knife, he hit balls at Augusta National and played a few holes just 19 days after the surgery. That seems quick, but only Koepka knows his body. Koepka isn’t going to tee it up unless he thinks he can win, but if there’s some strain on the knee, that could be too big a distraction and discomfort to overcome.

Why He’ll Win The Masters: Every player mentioned on this list has a great all-around game, but when it comes to ball-striking, this is the man that sits atop that list. You can’t not love Morikawa’s ability to get around a golf course. We saw it at last year’s PGA Championship and earlier this year during his win at Concession. If the putter is there for Morikawa, nobody should be surprised to see him win his first green jacket.

Why He Won’t Win The Masters: Morikawa ranks 181st on Tour in strokes gained: putting and 114th in putting from inside five feet. No five footer is a gimme at Augusta National, players that put on the green jacket take care of short putts throughout the week. If Morikawa hasn’t figured out the flat stick, particularly on the shorter putts, not even his ball-striking can save him at Augusta National.