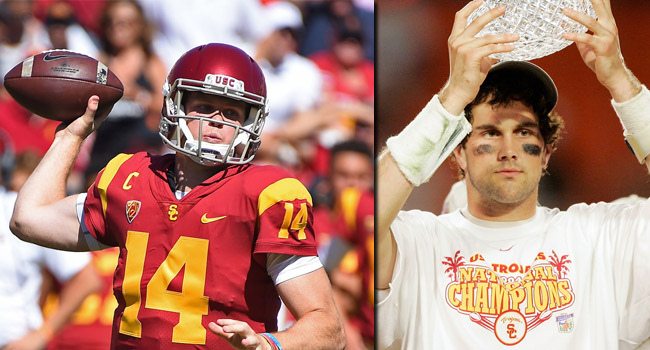 Back in November, it was reported that star USC quarterback Sam Darnold was considering staying at USC for another year if the Cleveland Browns ended up with the number one pick in the 2018 NFL Draft. Now, having finished their “perfect season” and with a celebratory parade on the way, the Browns not only have the first pick in the draft they also have the fourth pick as well!

And since the Browns are most assuredly going to take yet another quarterback with one of those picks, and the fact that UCLA quarterback Josh Rosen has pretty much said he would return to UCLA for another year rather than play for the Browns, it’s looking like Darnold would be pretty much to next in line to purchase a burial plot in the Cleveland Browns’ quarterback graveyard.

The ENTIRE Browns Quarterback Graveyard WILL be attending and participating in the parade if it actually happens. And yes Johnny's swan will be there too @CLETalkingHeads @finkn23 pic.twitter.com/5U9GN9otuj

Darnold has already gone on record saying, “Whenever I come out to go to the NFL, I think I’d be honored to play for any team.”

Note the key words in that statement: “Whenever I come out to go to the NFL.” That’s code for “if the Browns are planning on taking me in 2018 I’ll still be a Trojan in 2018.”

Then again, I could be wrong.

However, I won’t be if Darnold decides to seek out former USC quarterback, Heisman Trophy winner, and 10th overall pick in the 2006 NFL Draft, Matt Leinart for his thoughts on the matter.

His advice to Darnold? “I don’t know if you wan to go to the Browns.”

I can’t imagine why?

DeShone Kizer just liked a tweet saying “The Browns are and have always will be the worst organization in the league” #Browns pic.twitter.com/0A9dM25l9k