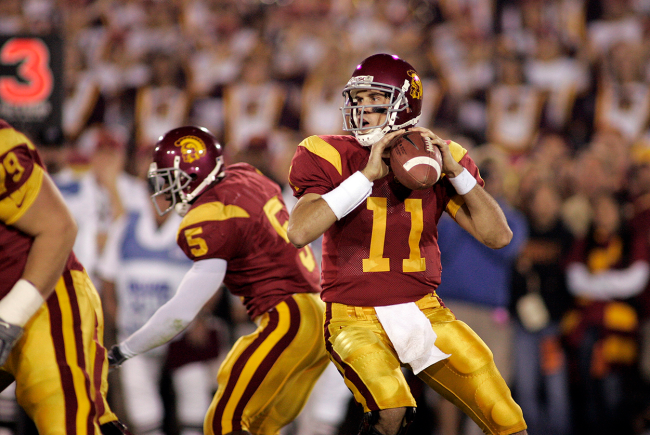 Life often comes full-circle, and when it does, it’s pretty crazy. That was the case over the weekend as Matt Leinart’s son Cole stopped by USC and tried on his dad’s number.

Matt Leinart, who quarterbacked the Trojans from 2001 to 2005, was a two-time national champion, a two-time Pac-10 offensive player of the year, a two-time First-team All-American and a Heisman Trophy winner. The 6-foot-5, 225-pound lefty led USC to an undefeated season as a junior, threw for more than 3,000 yards in each of his three seasons as the starter, and accounted for 108 total touchdowns over the course of his career.

While in Los Angeles, before being drafted No. 10 overall in the NFL Draft, Leinart wore No. 11 in cardinal and gold. His number has since been retired alongside legends like Carson Palmer, Charles White, Mike Garrett, O.J. Simpson and Marcus Allen.

At the same time, Leinart was dating USC basketball star Brynn Cameron, who also wore No. 11. They had a child together, Cole, and although he is only in eighth grade, he is considered to be one of the top quarterbacks in his recruiting class.

Cole Leinart is extremely big for his age and has a laser for an arm. He is also a standout on the hardwood— already throwing down in-game dunks and spotting up as a lights-out shooter from beyond the arc.

Although he could probably go on to play college basketball, Cole Leinart is expected to go the same route as his dad and play football.

He already has multiple D-I offers to play quarterback and recently followed in his father’s footsteps, literally. Cole visited his parents’ alma mater, just up the 405 from where Matt lives in Manhattan Beach, and tried on a Trojans uniform for the first time.

To make the entire experience even cooler, he wore his parents’ number 11 to take some fresh photos on top of the L.A. Memorial Coliseum.

Cole may decide that following his parents to USC might be too much, kind of like Arch Manning at Ole Miss. However, should the younger Leinart choose to suit up for the Trojans in a few years, it would be pretty cool.

The only way that it could get better is if he was to get his dad’s permission (surely it wouldn’t take much for him to say yes) and wore No. 11.