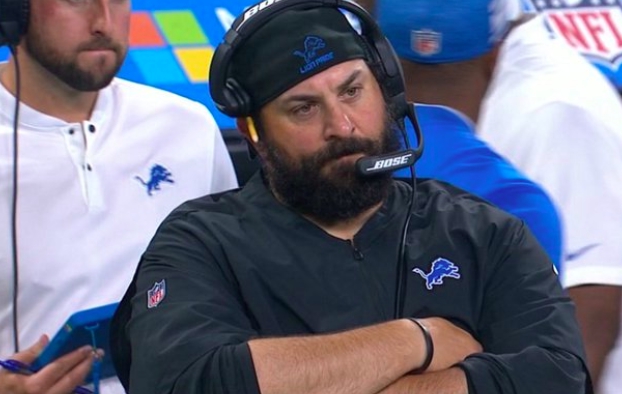 Matt Patricia’s debut as head coach of the Detroit Lions will be one he hopes to forget. The former New England Patriots defensive coordinator got trounced by the Jets by a score of 48-17 at home, 31 of those points were scored in a laughable third quarter. It was the largest margin of defeat for Lions coach in 17 years.

Granted, Patricia didn’t exactly take the reigns of a well-oiled machine. The Lions franchise has just one playoff win since 1957, but Jim Caldwell was fired after back-to-back 9-7 seasons so Patricia has just a small window to get his shit together. That or Matthew Stafford has to stop throwing four interceptions a game.

For must of the second half, Patricia was reduced to dejectedly shaking his head and looking down at his notes to distract himself from the massacre unraveling on the field. Fans of the other 31 NFL teams had a collective chuckle on Twitter at Patricia’s devastating first real test on the job. Ah, the internet is an immoral, unforgiving place.

Matt Patricia “I give up”

It’s only been one game Matt, give it a minute.

For Matt Patricia: You can't wear your hat backwards if you're not winning. The Perry B-League Bengals coaching staff taught me that long ago.

Yep, that’s me, Matt Patricia. You’re probably wondering how I ended up in this situation… pic.twitter.com/sP02jQc5do

Matt Patricia right now is looking through his options to see if he can blame Belichick and Brady for this one as wellpic.twitter.com/NbCRvNx5Ds

"How was your first game as a head coach"
Matt Patricia: pic.twitter.com/2P2Xz2iZwy

If Matt Patricia wanted to win, he would have stayed in New England. #DetroitLions #Lions

The Lions have a chance to bounce back Sunday against a 49ers team coming off a 24-16 loss against the Vikings. Lets lay off the Patricia panic button. For now.