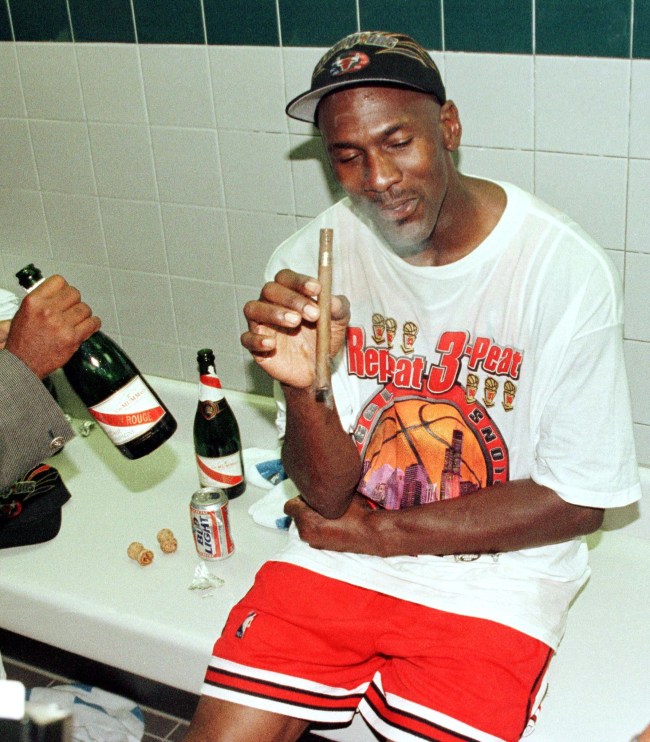 Thanks to ESPN’s The Last Dance — the 10-part series featuring Michael Jordan and the Chicago Bulls‘ run to six NBA titles during the ’90s — MJ’s legacy has grown even more. For a guy who was the most popular person on the planet during his heyday, and needed to grocery shop at special hours because of it, that’s sure saying a lot. I mean, at 57 years old, who would’ve thought that the world in 2020 would still be talking about Michael Jordan nonstop? Honestly, probably only the man himself.

With unreal stories about his self-motivation before NBA Finals’, or common fights with teammates in practice, or how he’d spit on his food so nobody else would sneak a bite, The Last Dance revealed a helluva lot about Michael Jordan as both a person and basketball player. It showed a glimpse of his wild methods to become successful. It showed how he handled relationships — and the entire documentary went deep into it all.

One thing we probably all noticed about MJ in The Last Dance was this: he routinely had a cigar by his side, in his mouth or in his hand. As an aficionado of stogies, it made plenty of sense, because it’s rumored that Jordan smokes an incredible six cigars each day. But his love for the things goes even deeper than that, as the Editor-in-Chief of Cigar Aficionado magazine, Marvin Shanken, even said Jordan once told him he used to smoke a cigar before every single home game in the car ride into the arena.

You realize that this is a very special man. The thing that blew me away was—and I have to go back to see how it came up; maybe I was asking about his smoking habits, and why he smoked and so forth—he confessed to me that nobody knew, but on the way to every Bulls home game, because he’s in the car for an hour and fifteen minutes to an hour and a half, he smoked a cigar. Usually a Hoya de Monterrey Double Corona. Which would allow him to relax, and be ready for the game.

The perception is that athletes don’t smoke. And if they do smoke, they smoke on the weekend. Certainly not before a game. That was such an eye-opener to me. It really told me that this guy loves cigars. He’s passionate about cigars. To a fellow cigar-smoker, that is real bonding.

So, uh, yeah, not only was Michael Jordan dropping 30+ a game and winning titles during his peak, but he was doing so after smoking a cigar before each home game to help him relax. That’s absolutely incredible, and something that Shanken sort of helped put into context even further; while also joking about the stogie getting a little too much credit.

A lot of people, it does hit them in a certain way. It could alter them. But, you know, you don’t inhale cigar smoke. And obviously Michael was able to get the benefits from it, which was the relaxation. And maybe in the fourth quarter, when there’s four seconds [left], maybe it was the cigar that helped him get a swish and win the game.

I’m gonna credit the cigar! Michael will laugh if he hears it, but I’m gonna say he never would have made those shots, at home anyway, had it not been for the cigar that relaxed him before the game.

When you think of Michael Jordan, you think of success. You think of power. You think of competitive spirit. And, because MJ has all that (and more), it’s only natural that he puffs cigars as a way to enjoy the fruits of his labor — even if it meant lighting one up on the 1.5-hour drive into a home basketball game while playing for the Bulls.