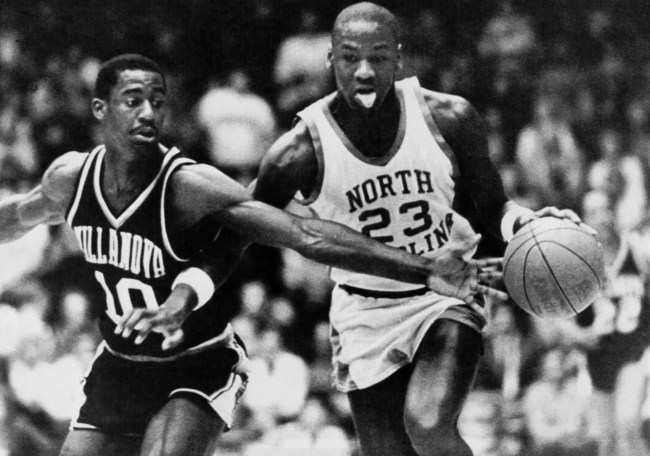 There have been loads of Michael Jordan stories over the past month or so that have left fans in awe. From MJ’s ruthless behavior towards opponents to his motivational techniques on teammates, and beyond, ESPN’s documentary, The Last Dance, sure did reveal a helluva lot about the GOAT during his playing days.

But, as we all know, the in-depth documentary couldn’t possibly tell every single story about Michael Jordan. After all, pretty much everything the guy does turns into some sort of competition, which ends up being something wild about a $100,000 bet on the golf course or something. Seriously, MJ treats every day like it’s his last, and never holds back in anything he does. That’s commendable.

As wild as all these stories about Jordan have been, there’s one that isn’t all that well-known; even to diehard fans of his. That’d be the one about the time he was used as a human cutting board during a prison ministry event during his college days at the University of North Carolina.

According to Fadeaway World, Michael Jordan, who was still an unknown commodity at the time, was volunteered to be part of a stunt from Dallas evangelist Bill Glass that involved a samurai sword, a watermelon, and a bunch of prison inmates. No, seriously, that actually happened. Rather than even try to describe the whole situation, take a look below at how the thing unfolded — and how it left Jordan stabbed, and in need of three stitches.

When Smith offered up this unknown freshman, Glass was gracious but dubious. Jordan was certainly better than nothing. But part of the idea behind Glass’ Weekend of Champions ministry was to have a big-name athlete take part in the witnessing programs. Aside from their rap sheets, what was to separate Jordan from these men doing time? Without the fame, how would they identify upward?

Then Jordan hit a certain championship-winning shot in March, and when that summer’s ministry rolled through Raleigh’s Triangle Correctional Facility, the inmates warmly welcomed him to the exercise yard. And Jordan, decked out in his fresh U.S. All-Stars warmups, got enthusiastic props for thoroughly schooling a cell block all-star. Glass was relieved. Those who didn’t receive salvation at least would have something to write home about.

Before Glass hit ’em with the Good Word, a martial-arts expert from Tennessee named Mike Crain was invited to ratchet up the yard’s emotion. Jordan stuck around to see the show. And when it came time for Crain to do his crowd-pleasing samurai-sword show, he asked for a volunteer.

History gets a little murky after that. Glass remembers that Jordan willingly climbed onstage. Crain remembers it differently. See, the sword trick calls for Crain to chop a full-grown watermelon in half while it rests on the volunteer’s stomach. Most everyone who winds up as the fruit platter declines to do so at first, especially after watching Crain, a burly Southerner decked out in an all-white martial-arts suit accented with his black belt, slice the air with cold steel for a few minutes.

But Jordan was more skittish than most — and emphatically said, “No.” Crain wasn’t fazed. He worked the thrill-hungry crowd of inmates to his advantage, and when he began hinting to Jordan that maybe he wasn’t quite man enough to handle the job of human cutting board, the 19-year-old responded to the challenge just the way you would expect. He climbed up the wooden platform and laid himself back on a weight-training bench that had been used in an earlier act. And Crain placed the melon on Jordan’s belly.

So, yes, Michael Jordan’s wildly competitive spirit actually led to him being a chop block, where a burly man with a sword was about to cut open a watermelon on his torso. That’s where things got even weirder.

As Crain produced another black sash and began blindfolding himself, a panicky Jordan started to get up. Crain held him down lightly between the produce and the bench. In a scene that looked like a jailhouse staging of Shirley Jackson’s The Lottery, the brothers in the yard inched closer to the stage. Crain told Jordan to shield his eyes so stray rind and seeds wouldn’t blind him, but MJ’s eyes were already shut tightly enough to secure a home.

Crain drew back his sword and slashed into the juicy melon. But his blade traveled too far south, and the rail-thin Jordan’s protruding right hip slowed the blow. The watermelon was torn, not severed.

Down came the blade a second time, and now shards of watermelon went flying into the sky and across the stage. Crain knew from his audience’s reaction that he succeeded in dividing the fruit, but he had the queasy feeling that he might have gone too far. This whack was in the right place, but Crain had misjudged the amount of give in Jordan’s lean belly. After pulling off his blindfold, Crain checked to make sure his volunteer was OK. When he and Glass wiped away the juice, melon and seed that covered the front of Jordan’s white jersey, Jordan spotted a tear in the fabric.

“Look whatcha did!” he screamed at Crain. The warmups were Jordan’s reward from his first international tournament. But the guy who had driven Jordan to the prison was concerned about more than the jersey. He suggested Jordan check to see if he had been wounded by the blade. Still heated about the shirt, Jordan wouldn’t look until they were back in the car and the driver insisted. Then they both looked down and spotted a gash near Jordan’s navel. Because he hadn’t felt the wound, Jordan hardly was concerned, even after doctors at an emergency room used three stitches to close him up. He did harbor a small grudge — but not about the injury. That would heal in days. Warmup gear like this, though, was one of a kind.

There are a lot of reasons why Michael Jordan can be called a legend. Whether it was playing at a high level during the infamous “flu game” in the 1997 NBA Finals, or hitting the game-winner to bury the Utah Jazz in the ’98 NBA Finals, among plenty of others. But here’s another reason: Because the dude survived a crazy watermelon stunt that could’ve easily gone awry. Instead, he took it like a champ, got some stitches, and was more pissed off about the one-of-a-kind warmups he was wearing than anything else.