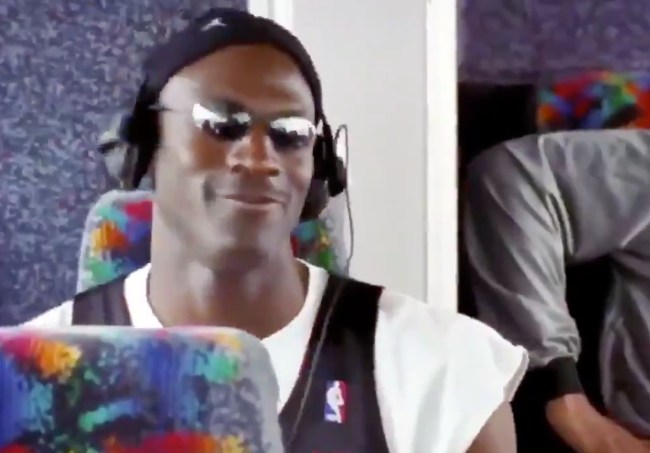 ESPN aired the tenth and final episode of The Last Dance documentary chronicling Michael Jordan‘s unrivaled career. Jordan was already the greatest basketball player in history but this documentary has certainly silenced some of his detractors, at least for the time being.

We were treated to some fantastic memes throughout The Last Dance. There’s the Laughing Jordan Meme of him holding an iPad, the Laughing At Gary Payton Meme, this Very Relatable Jordan Meme, and there’s my new favorite: Michael Jordan Jamming Out.

If you were around here about three months ago you might remember the ‘Running Javelina Meme‘. These memes were all shared by a Twitter account that used a clip of a wild pig running at top speed through a neighborhood and each clip had a different song that worked perfectly with the pig’s running. You can check that out here if you want.

This new Michael Jordan Jamming Out Meme is very similar. It’s a clip of Jordan vibing out on the bus, listening to his headphones and dancing in his bus seat before tipoff on June 3, 1998. There are already A TON of these clips and they’re all fantastic so make sure to check out more than one.

This one has gone the most viral, so far:

One of my personal favorites right here:

This one should not work so well. It shouldn’t. But somehow it does. It’s masterful.

You already knew this one was coming.

I cannot explain my love for this one but it’s there. It really is.

This is another one that somehow works perfectly and has no business doing so.

I truly forgot this song ever existed.

This song still slaps as hard as when Lil Nas X released it. Fight me if you disagree.

Here’s the very first one of these that was released, where it all began: