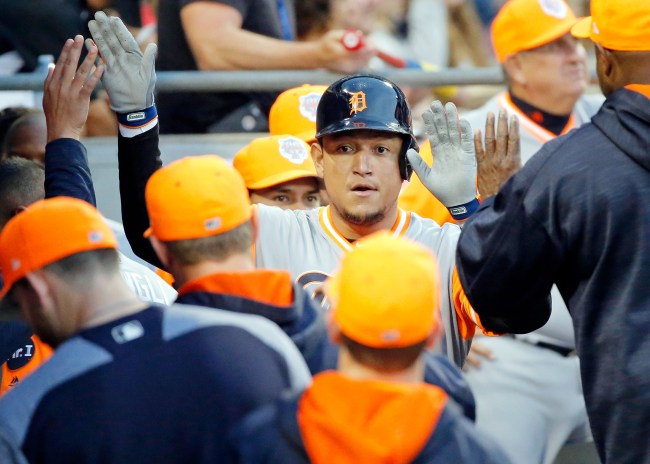 Turns out, there were no stipulations in Miguel Cabrera’s 8 year, $248,000,000 contract with the Detroit Tigers that required him to learn the names of teammates he’d spend most of his year with.

The two-time AL MVP finds himself a month out from his 35th birthday on a rebuilding organization that lost nearly 100 games last year. Gone with the team’s postseason hopes are Justin Verlander, J.D. Martinez and Ian Kinsler.

Cabrera is owed $192 million from the Tigers through 2024 and former Tigers teammate Torii Hunter thinks Cabrera should take on the role of mentor to the younger guys in the clubhouse. That is unlikely considering the 11-time All-Star has historically been immune to learning the names of his teammates.

“I’ve been here for 10 years and most of my teammates, I don’t even know their names,” he says.

C’mon. Even in the old days, Miggy?

“No,” he protests. “Even in the old days. You can ask any player if I know every name and he’ll say no.”

So what, then, did you call them?

(Torii) Hunter, in Florida, and (Ian) Kinsler, in Arizona, both roar with laughter when they hear this.

“That’s so true. That’s 100 percent true. And he has this funny way of saying it. He sticks his hand out and says, Bro…bro…broohhh.”

Cabrera’s blissful ignorance is downright unbelievable considering teammates’ animus get called every time they step to the plate, but he’s not the only MLB superstar who couldn’t give a fuck.

Red Sox legend David Ortiz played 11 seasons with Dustin Pedroia and well into their relationship, he had no idea his name was Dustin–“I thought it was Peewee,” Big Papi would say.

“You thought my parents would name me fucking PeeWee?” Pedroia rightfully shot back.