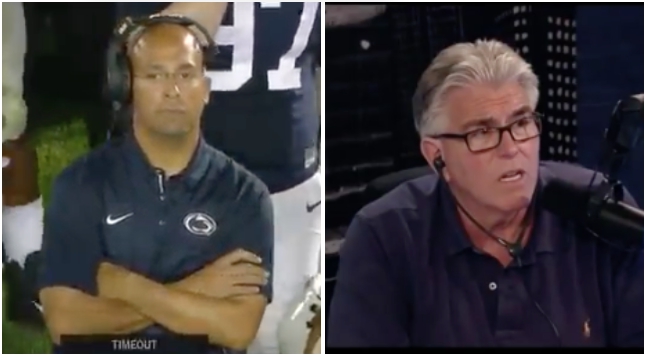 With 11 seconds remaining in a 56-0 blowout against Georgia State Saturday, Penn State coach James Franklin called a timeout just as Georgia State was set to attempt a field goal. The presumed icing of the kicker worked, as Georgia State shanked the kick following the timeout.

After the game, Franklin swindled some tall tale about how he was never trying to ice the kicker, he was just trying to get the proper personnel in the game.

Here’s the footage of the incident:

“What the heck do you need to block it for?!” Francesa said. “Let the ball go through the uprights, you jerk!”

This isn’t the first time Franklin’s arrogance has been called into question. Last week, his number 4 ranked Nittany Lions beat up on Pitt 33-14, exacting revenge on their loss to Pitt last season. After the game, Franklin said, “Last year for their win it was like the Super Bowl, but for us this was just like beating Akron.”

I believe Franklin’s explanation. History proves that he’s not the type of guy to rub successes in his opponents face…