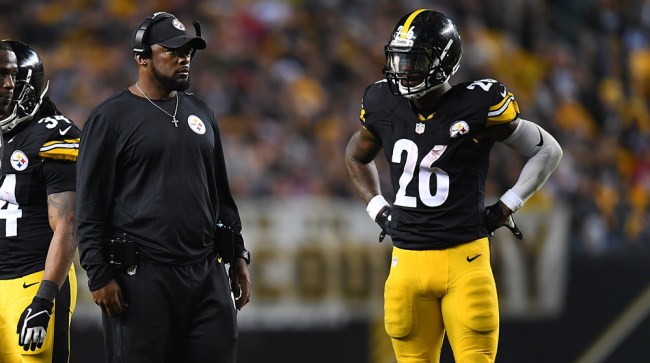 On Wednesday, during a conference call with New England Patriots reporters, Pittsburgh Steelers head coach Mike Tomlin was asked if he misses star running back Le’Veon Bell. His answer was fantastic, and very blunt.

Bell, who will miss the entire 2018 NFL season, has been spending some his newfound free time hanging out on yachts, promoting his new EP, and writing cryptic tweets. (Might want to be careful there, Le’Veon.)

In the meantime, the Steelers have been rolling with Bell’s backup James Conner, rank 29th in the NFL in rushing yards, and are in the midst of a three-game losing streak.

“From OTA 1, he wasn’t a part of us,” Tomlin elaborated after saying no, reports NESN. “It’s not something that this group of men have missed. It’s a part of business, unfortunately, at this level. We all know and understand it. We’ve been focused on the people that have been here and working.”

Of course, what else could Tomlin say? Yes, we missed him? Of course they did. But Bell left them hanging when he turned down the $14.5 million he would have made had he played this season.

As for this coming Sunday, Conner is nursing an ankle injury and may not play against the Patriots. So… Jaylen Samuels, anyone?