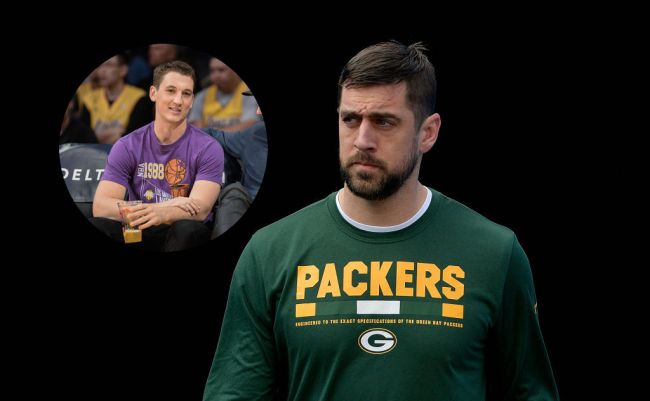 Aaron Rodgers is currently going through a very public divorce with the Green Bay Packers, the NFL team he’s called home during his 16-year, future Hall of Fame career. Want to know why their separation has been so out in the open? Because Rodgers had made damn sure of it, that’s why. Whether it’s on the Pat McAfee Show or ESPN’s SportsCenter, on Instagram Live or Twitter, the three-time, and reigning, NFL MVP has made his position abundantly clear: he wants out of Wisconsin.

As entertaining as Rodgers and the Packers trading chess moves over the airwaves and through social media has been, though, there’s arguably one element of this whole circus that’s far-and-away the funniest aspect of it all, and that’s the fact that Top Gun: Maverick star Miles Teller has seemingly had a bird’s eye view of Rodger’s intentional bridge-burning as it unfolds.

Now — and this is a total guess here — but I’m assuming that Teller is in the mix because he and Shailene Woodley, who co-starred in the Divergent film franchise together, have remained friends ever since. Woodley, of course, is now engaged to Rodgers.

It all began at the Kentucky Derby, where a dapper-looking Teller and his stunning wife Keleigh Sperry posed for a photo-op alongside Rodgers’ fellow Packers teammates.

The Kentucky Derby is a star-studded event, so surely, this was just two famous people bumping into each other, right?

Rodgers and Teller, as it turns out, are HOMIES, as the pair was next spotted in Hawaii getting wasted and singing songs from A Star Is Born, which, honestly, is the dream:

Fast forward to today, and Teller’s wife posted a photo of the foursome, which she called “soulmates”, at a predictably gorgeous Hawaiian waterfall:

This brings me to why it’s so funny. We’ve all been in that situation, albeit not discussing things like multi-million dollar NFL contracts and the future of our Hall of Fame careers: late night after a long summer day, dinner in the belly, and tequila to wash it all down when a discussion about life crops up. It’s in these moments — occasionally, at least — that some men make grand decisions about their future, as if the combination of warm weather, cold liquor, and the stress-free vacation lifestyle give them the clarity of mind that cannot be obtained elsewhere. It’s in these moments that questions such as “Is this what I’m meant to do?” or “Is this who I’m meant to be” arise.

And I simply cannot help but picture man-bunned Aaron Rodgers, tanned to a crisp and already fed up with the Packers’ bullshit, looking off into the Hawaiian sunset and declaring aloud, somehow to both himself and everyone who happens to be within earshot, “I’m done with the Packers, I’m ready for the next chapter,” to which Miles Teller replies with something along the lines of, “Hell yeah, my brother — fuck ’em.”