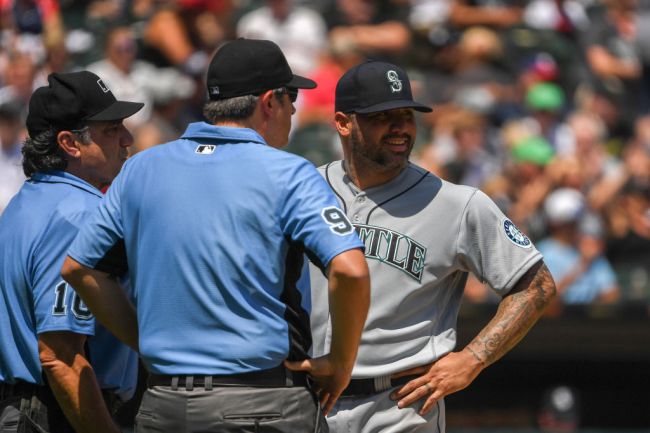 Santiago, who was removed from Sunday’s Mariners game after pitching 2.1 innings, received a 10-game suspension from the MLB on Tuesday.

MLB Announces a positive test for the substance on Hector Santiago's Glove; the #Mariners Starter now becomes the answer to a trivia question as the first player suspended 10 games & fined for "doctoring" the ⚾️ w/ a foreign substance; Santiago is appealing the suspension pic.twitter.com/7dXbQbz04U

As protocol would have it, Santiago was checked for substances on his way into the dugout. The umpire crew found a sticky substance on the inside of his glove and promptly ejected him from the game.

Santiago maintains that he did not use an illegal substance. The 33-year-old middle reliever said that it was a mixture of sweat and rosin (a legal substance) that turned sticky when mixed.

He was told that he could not use rosin on the glove hand— a rule that is not explicitly stated in the rule book. Nevertheless, he was tossed.

The MLB blows it again.

Per MLB rules, the glove was confiscated by a league official and was supposed to undergo a chemical test by a lab in New York.

“Once they take it back and check it, it’s just sweat and rosin,” Santiago said after his removal. “If they’re going to do all this science stuff, it’s going to be sweat and rosin. We’ll be all right.”

However, ESPN’s Jesse Rogers is reporting that the league did not test the glove.

Per source, the league didn't need to inspect Santiago's glove any further. The ejection and discipline are based on the umpires’ report of having detected a foreign substance.

Yes, you are reading that correctly….

The league dolled out a 10-game punishment to Santiago for using an illegal substance. BUT THE LEAGUE DID NOT DETERMINE WHETHER HE ACTUALLY USED AN ILLEGAL SUBSTANCE.

Unless Santiago was truly using an illegal substance (he probably wouldn’t be appealing if he was), then the entire structure of the league needs to be torn down and rebuilt from the ground-up. WHAT ARE WE DOING HERE?!?!?!?!

Commissioner Rob Manfred and the rest of Major League Baseball has blown this entire situation from start to finish. Pitchers across the league are already upset about the mid-season crackdown and now players are being suspended without definitive proof.

There is certainly no coming back from this and the outcry is only going to continue to grow across the league.

FIGURE. IT. OUT. MANFRED.