The MLB Playoffs Are Sick, But These Wild Suggestions Would Make The Three-Game Series’ Even More Insane 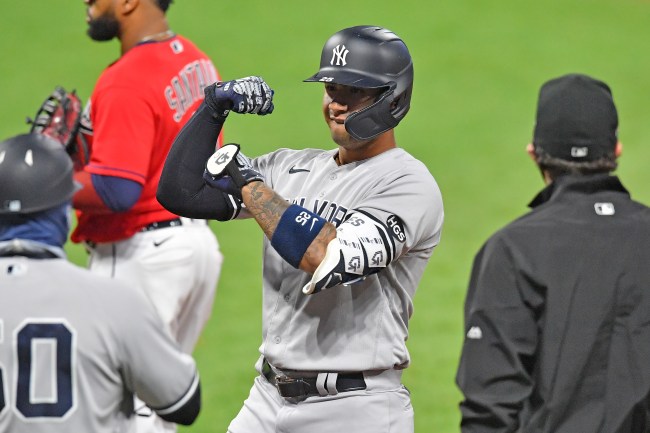 While sitting my ass on the couch to take in this year’s MLB Playoffs, a funny thing happened to me: I started thinking about how, in this already wild format, the postseason could be even more insane. I know, it sounds a little strange considering baseball fans are already getting a 16-team tournament across both the American and National Leagues, so why the hell can’t I just be satisfied with that, right?

But there I was, stuffing my face with potato chips and watching my Cleveland Indians get absolutely crushed by Robby Berger‘s New York Yankees, wondering what could possibly take this unconventional format to another level. Dear Rob Manfred, feel free to steal these suggestions for next year’s MLB Playoffs, because they’re sure to get the fans going.

Aggregate Scoring In A Three-Game Series

We see it in soccer tournaments like the Champions League, so why not have the MLB Playoffs feature an aggregate scoring system during these wild three-game series, too? Imagine the strategy that would take place in this scenario, with managers forced to hunt runs in Game 1 rather than be complacent and just take the loss. Imagine batters actually treating every pitch with meaning and not just mail it in during a blowout.

Look, my Indians got embarrassed by the Yanks in Game 1, 12-3, so it’d be fun to see them guaranteed another two games and try to make up that difference. It’d be more baseball, too, rather than a potential quick exit from the postseason in the current format of best-of-three.

Runner In Scoring Position After The 7th Inning

Want to really make games in the MLB Playoffs tense? How about adding a runner to second base to start each inning after the 7th? If coupled with the aforementioned aggregate scoring format, this would bring a whole new dynamic to baseball that fans have never seen, putting extra emphasis on scoring and situational hitting.

We’ve already seen this add excitement to extra innings, so it’s something that’s slowly making its way into the sport. But I’d like to see it expanded and incorporated over the final three innings of a baseball game.

Using the previous suggestions, imagine a Game 3 between the Indians and Yankees where New York holds an aggregate score of 22-17. Come the seventh inning in that deciding game, both teams’ strategy would completely change if a runner starts on second base each inning. Would Cleveland play small ball to chip away at the aggregate score? Do they swing the bats and hunt for a big inning? So many possibilities, all of which are fun AF.

No Extra Innings In The MLB Playoffs

Speaking of extra innings, why not get rid of them during the postseason to make games much more intense for both players and fans? If baseball wants to appeal to a younger audience, this has to be considered — especially when it’s do or die in the MLB Playoffs.

Nobody wants to sit through a five-hour baseball game. Sure, those contests are intense, but they’re so old school and boring. Instead of extras, how about something a little more fun for both fans and players…

A 10-Out Home Run Derby To Break Ties

Oh, boy, this would be fucking awesome!

I just imagine a game between the Yankees and Indians that’s tied after the 9th inning, and both teams getting a quick 10-minute break to choose as many batters as they want to for a 10-out home run derby to decide the outcome. This sure as hell beats extra innings.

Even better, imagine a three-game set that’s got an even aggregate score and is still tied after the 9th inning of Game 3. How dope would it be to see a home run derby decide which team moves on and which team books its offseason vacation plans to warmer weather? This needs to happen.

The MLB Playoffs are exciting and unconventional this year — as is everything in 2020. So why not up the ante and make the entire format something that brings new life, energy and strategy for both players and fans?