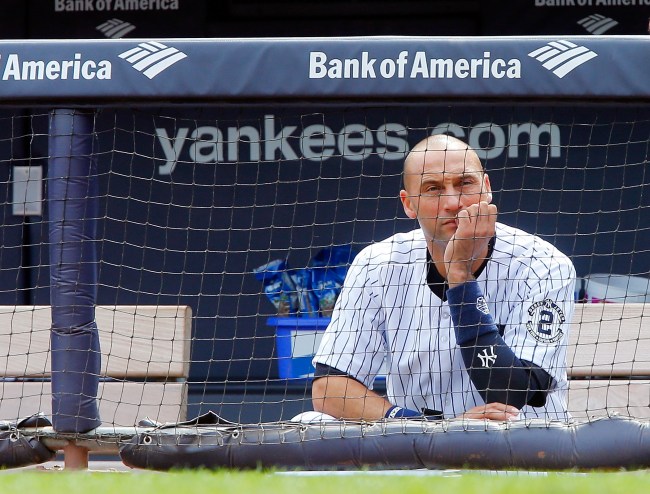 Derek Jeter is one of the most iconic name’s in baseball history, as the former New York Yankees legend won five World Series titles, captained the “Bronx Bombers” for 20 seasons and entered the Hall of Fame in 2020 as a near unanimous decision — which would’ve only been the second time ever. So to say that he dedicated his life to the sport is an understatement.

While Jeter clearly loves the game, it doesn’t mean he has to agree with every single thing about it. In fact, in his own words, “The Captain” openly admitted to “hating” extra innings in MLB games, basically saying he got bored as shit during long games while he was a player.

Talking to Kyle Sielaff and Glenn Geffner on The Line Drive, Derek Jeter showed support for MLB adjusting the extra innings rule during the abbreviated, 60-game season that’s about to take place. DJ also mentioned how making a universal designated hitter will make the sport more entertaining — because, if we’re being honest, nobody wants to see a pitcher try to pretend to be a hitter in the National League.

“Even extra innings. As a player, I’m just talking on my behalf as a player, I hated extra innings. I just didn’t want to play them. You play in 162 games and it’s a long season, and you play 15 or 18-inning games, it’s not that much fun,” Jeter said on “The Line Drive” with Kyle Sielaff and Glenn Geffner.

Jeter also supports the designated hitter rule coming to the National League for the season.

“The fans want to see a little more excitement in the sport,” he added. “I think this is a year, especially, we can try some new things out and see what fans think about it.”

Isn’t this every baseball fan? Seriously, how many people want to sit in a 95-degree stadium for 6.5 hours to watch a shitty offensive game that ends with a score of 3-2? It can be exciting when it’s the postseason and any pitch, hit or mistake could be costly, but, even then, it can be tiresome AF.

So kudos to Derek Jeter for telling it like it is and speaking as a former player himself, because there’s a good chance every baseball player agrees with him about how miserable extra innings can be — and most fans would definitely agree since there’s no real entertainment whatsoever. It’s great seeing MLB make some changes to things, so we’ll have to see how all this pans out.