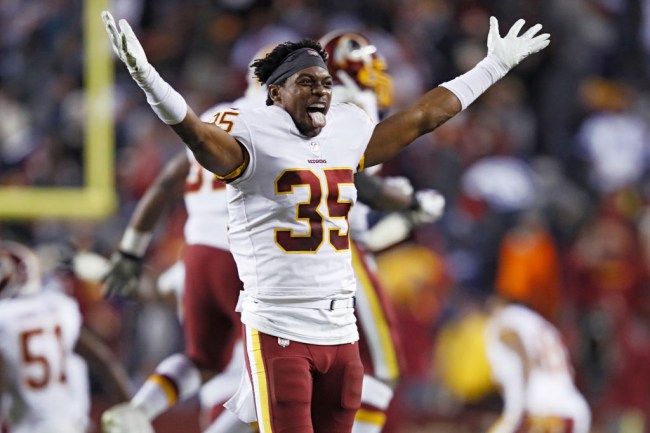 Montae Nicholson is a promising young safety for the Washington Redskins who started the first seven games of the season before the Redskins acquired Ha Ha Clinton-Dix from Green Bay. Since then, he’s played sparingly, and in light of recent events, it looks like it will stay that way.

The 23-year-old was arrested Tuesday after engaging in a violent altercation in the middle of a Virginia street around 2 am.

Fox News reported that the incident occurred after Nicholson and 24-year-old Sydney Maggiore were honking their car horn at an unidentified man and woman before things turned physical. But, a witness told TMZ Sports that tensions flared before the car incident.

Details on Redskins Montae Nicholson & His Girlfriend Arrested for Allegedly Beating Up Another Couple; GF Busted a Female's Head With a Bottle; Nicholson Bailed Himself Out & His GF Still is In Jail (Photos) https://t.co/exCglPylgU pic.twitter.com/Ae5U9vA4BW

In any event, TMZ Sports obtained footage of the Michigan State product violently pummeling the man and a man in a jean jacket and bodyslamming another who tried to restrain him. Maggiore is believed to have hit the female with a beer bottle.

Montae is wearing the red hoodie in the video.

Loudon County Sheriffs reportedly arrested Nicholson and his female companion at the scene. Montae was booked for assault and battery and drunk in public, but released  on $2,500 bond a short time later.

The two who were assaulted were taken to an area hospital, where they were treated for non-life-threatening injuries.

The Redskins gave the sterile corporate response to the news.

It will be interesting to see if the Redskins award his with a max extension.