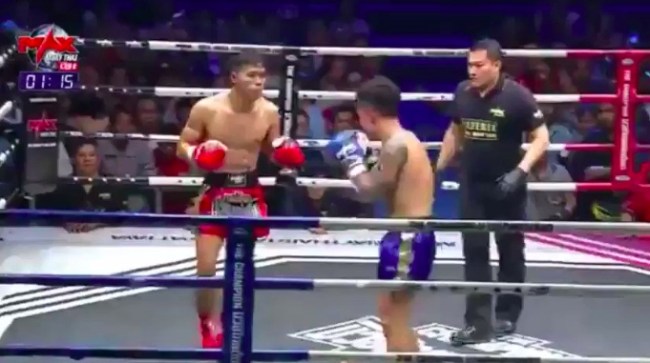 We’ve seen some incredible things in the octagon from all corners of the earth in the last month. Like two weeks ago when Yair Rodriguez knocked out his opponent with a devastating upward elbow at the buzzer to secure victory. Or an MMA fighter from South Korea pompously exiting the tunnel singing a god awful Imagine Dragon’s song before getting his ass handed to him. Or Shaquille O’Neal getting choked out by a 115-pound female fighter.

Quite possibly the most electric moment in the octagon in quite some time occurred at a Max Muay Thai event in Thailand where Chinese star Gou Dakui knocked out Thailand’s Super x Sitsontidech in a second-round TKO victory. En route to victory, the 25-year-old accidentally smashed the referee’s head with a head kick, dropping him to the canvas while Dakui pranced around the ring celebrating.

Crazy scenes unfolded at todays Max Muay Thai, as Gou Dakui knocks out both his opponent and referee at the same time. pic.twitter.com/jfrFeVsPo6

I don’t know why it took Dakui 30 seconds to check up on the referee, the man who he nearly sent to the hospital for just doing his job, but I can’t rule out that the duel-knockout wasn’t personal.

With the win, Gou improved to 21-9 while his opponent, Super X Sitsontidech dropped to 60-32-2 and has now been knocked out in all of his last five fights, according to BJ Penn.

As far as the referee, he dropped to 0-1 on his career with one loss by TKO.