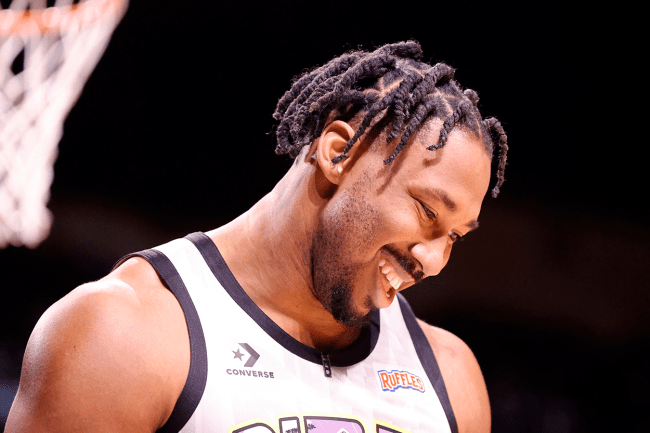 Just over a year ago, the Cleveland Browns tried to force Myles Garrett to retire from basketball after video of one of his dunks went viral. It does not appear as though that it worked, or the team decided to roll back its rules.

On Sunday night, ahead of the NBA Summer League action, Garrett threw down a vicious two-handed slam during Cavaliers warmups.

Garrett, who probably could have played basketball professionally if he had stuck with the sport, has been known to hoop. He played in the NBA’s All-Star Celebrity Game back in February and was straight hooping. Garrett has also been known to body people in pickup games while looking like Thanos and dunked all over some poor soul’s head in a pickup game past.

Over the weekend, Garrett dropped another basketball mixtape on his Instagram. In the video, the 26-year-old defensive end throws down a standing windmill dunk, plays lockdown defense, throws a vicious shoulder and drains deep threes in his defender’s face.

However, the video from over the weekend is particularly impressive based on what he is wearing on his feet. Throughout the entire basketball session, which was played on a hardwood court, Garrett is only wearing socks. No shoes, not barefoot, just socks.

That’s not easy. In fact, quite a few football players chimed in on Myles Garrett’s sock-wearing mixtape.

Cleveland linebacker Jeremiah Owusu-Koramoah, who was defending Garrett in the video, wanted to make sure everybody knew the truth.

“The power to control the narrative… this video missing so much y’all. 😂,” he commented.

Regardless of how much video was edited out, Garrett put on a show. And he did so in socks, before turning around the next night and throwing down a monster jam during NBA Summer League warmups. He can play.