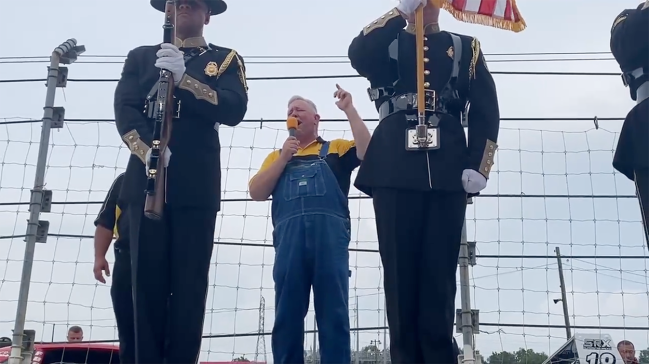 Pastor Joe Nelms has become a legend within the racing world. His now-famous pre-race invocations are exhilarating and unique in the best way possible.

Nelms, who is the pastor at First Baptist Church in Lebanon, Tennessee is a huge racing fan. When he was called upon to deliver the invocation at the Nashville Superspeedway back in 2011, he was elated.

Little did he know, he would soon deliver one of the most famous prayers of all-time.

In a profile with Fox Sports, Nelms shared that he did not have any material written, planned or memorized back in 2011. He does not believe in scripts when it comes to prayer.

Nelms had an idea of what he would say. He had seen too many pre-race invocations that did not connect with fans, drivers or their teams and was set out to change that.

Pastor Joe Nelms delivered a prayer that will never be forgotten.

“Heavenly father, we thank you tonight for all your blessings you send, and all things give thanks,” the prayer began before taking a swift turn in focus toward racing.

“Thank you for GM Performance Technology and R07 engines. Thank you for Sunoco racing fuel and Goodyear tires that bring performance and power to the track.”

At that point, he went on to deliver the line of all lines, referencing the movie Talladega Nights.

“Lord, I want to thank you for my smokin’ hot wife tonight, Lisa, my two children, Eli and Emma – or, as we like to call them, the Little Es.”

Nelms then turned the focus back to the standard.

“Lord, I pray and bless the drivers, and use them tonight. May they put on a performance worthy of this great track.”

But he wasn’t done there. Before wrapping his prayer, Nelms referenced Darrell Waltrip’s famous line in closing.

On Saturday night, Pastor Joe Nelms was back at the track.

Nelms, who has become a local racing icon, delivered the invocation prior to Saturday’s SRX race at the Nashville Fairgrounds track. In a yellow shirt and denim overalls, he once again thanked the good Lord for his smokin’ hot wife Lisa and closed with a “boogity, boogity boogity” as the crowd joined him in full voice.

Yes, he thanked the Lord for his smokin’ hot wife Lisa.

Saturday’s SRX race just so happened to be my first-ever race.

The atmosphere in Nashville was electric and Pastor Joe’s pre-race invocation set the tone. If you didn’t know what racing was about before Pastor Joe took the stage in front of a sold-out crowd, you did as the crowd joined him in shouting “BOOGITY, BOOGITY, BOOGITY— AMEN!”