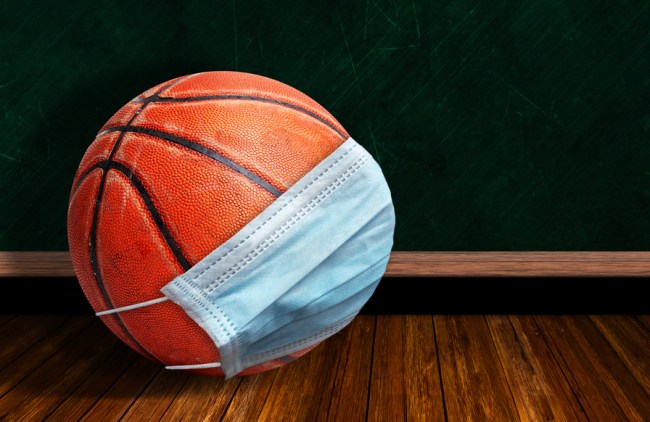 The grand experiment the NBA conducted when it constructed a bubble in Orlando couldn’t have really been much more of a resounding success, as the league managed to defy the odds and silence any skeptics after completing its suspended season without any major issues (aside from the multiple chicken wing-related incidents that led to players being forced to quarantine).

However, the idea of harnessing that strategy for an entire season was never taken into serious consideration, and as a result, the NBA headed into this one knowing it would have to grapple with the same growing pains the other leagues who’ve taken a less conservative approach to the situation have repeatedly encountered over the past year.

The NFL and NCAA were forced to constantly reschedule games over the course of the regular season due to various outbreaks and the NBA hasn’t been immune since its most recent one kicked off. Based on current rules, teams are required to have a minimum of eight players on their bench for each contest, and while the 76ers met the minimum by dressing an injured player who couldn’t actually play on Saturday, the Heat and the Celtics had their game called off on Sunday after Miami failed to hit the quota.

The Boston Celtics-Miami Heat game tonight has been postponed, sources tell @TheAthleticNBA @Stadium. A Heat player has returned an inconclusive test, and team does not have required eight players to proceed with game tonight due to contact tracing.

There are a few different schools of thought concerning how leagues should approach things during the pandemic, as plenty of people seemed to think the Rockets should’ve been forced to forfeit a game that was ultimately pushed after James Harden partied without a mask in a club and some of his teammates decided to pack themselves into a barbershop.

However, I can also understand the argument that teams shouldn’t be punished for something they theoretically have no control over, as there’s only so much players can do to prevent themselves from being exposed while still having to train, practice, and travel and it’s not entirely fair to discipline anyone who followed all the protocols but was still exposed.

When I heard about the situation Philadelphia was confronted with over the weekend, I couldn’t help but think about the time a combination of foul trouble, ejections, and injury resulted in Alabama’s men’s basketball team almost pulling off what would’ve been the greatest upset in history when the Crimson Tide were forced to finish out a game against Minnesota with only three players on the court.

However, that was a walk in the park compared to the high school basketball player who was recently forced to finish out a game as the only member of his team represented on the hardwood.

Now, I can understand why the NBA wants to do as much as it can to avoid having its season impacted by the pandemic, and when you consider how early in the year it is, it makes sense to push games to a later date if a squad can’t field a competitive roster. However, I would like to pull a Jonathan Swift and introduce a modest proposal to Adam Silver: make teams play regardless of how many people they have.

Sure, it might not be great from a competitive standpoint, but as far as entertainment goes, forcing teams to play whatever hand they’re dealt even if they don’t have enough cards would be absolutely electric. There were concerns about falling television ratings heading into the season, and while it looks like the league has managed to bounce back, can you imagine how many people would tune in if they knew one side was forced to tip off with four players or a bench home to trainers and equipment managers who had to suddenly suit up?

Is there any chance the NBA will take my proposal into consideration? Absolutely not, but hey, a man can dream.