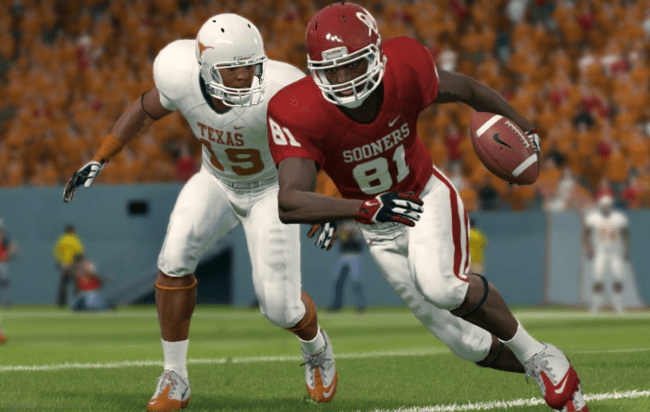 In 2014, former UCLA basketball player Ed O’Bannon secured a victory in court after filing a lawsuit against the NCAA for including his name, image, and likeness in NCAA Basketball 09 without his permission—a ruling that not only led to the demise of that franchise but also resulted in the death of one of the most beloved video game series on the market: NCAA Football.

While there was technically nothing stopping EA Sports from creating a generic college football title, the company decided it would be easier to cut its losses entirely and stop developing a franchise that came to an end with the release of NCAA Football 14.

For a long time, it seemed like largely forgotten Michigan QB Denard Robinson would forever be remembered courtesy of trivia questions concerning the last athlete to appear on the cover of an NCAA Football video game. However, the tides began to turn a few years ago after EA’s CEO provided fans with a glimmer of hope when states started to pass laws that would’ve permitted student-athletes to profit prior to the landmark Supreme Court decision that ushered in the NIL Era.

It didn’t take long for people to start speculating about the potential resurrection of the NCAA Football series, and earlier this year, EA Sports found itself in a unique position when it was lauded with praise after announcing the franchise was officially coming back from the dead.

Since then, we’ve been treated to a steady trickle of information concerning what we can expect when the newest installment is released more than a decade after the previous one hit shelves.

On Monday, Brandon Marcello of 247Sports treated us to our latest look at what’s in store, which includes updates concerning ongoing negotiations with players, the various modes and features that will be included, and some news concerning the game’s engine that probably won’t sit well with anyone who’s thrown a controller at a wall over a Madden glitch.

He also supplemented that report with some news that probably won’t sit well with a lot of people who haven’t had the chance to upgrade to a PS5 or Xbox Series X or S in a tweet where he said multiple sources have told him the game tentatively dubbed EA Sports College Football 24 will only be available on next-gen consoles.

EA Sports College Football 24 is expected to be on next-gen consoles but not on previous gen (PS4 and XBox One), sources told @247Sports.

A number of next-gen exclusive titles have dropped since those consoles were released in 2020, but there haven’t really been any that have given people incentive to upgrade from a PS4 or Xbox 360 just so they could play them. However, it’s safe to say the first college football video game to come out in a decade could do exactly that.

Here’s to hoping they’re a bit more readily available by the time the game comes out next summer.