Why Can’t There Be An ‘NCAA Football’ Video Game Without Any Real Players? Here’s What It Could Look Like (And Why It Hasn’t Happened) 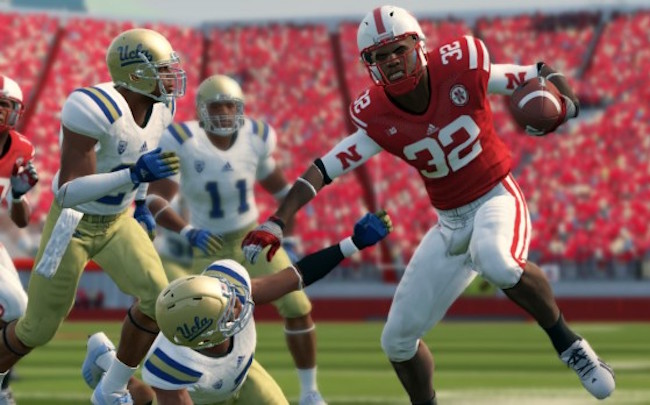 As of this writing, you’ll have to shell out $100 on eBay if you want to pick up a copy of NCAA Football 14 and an additional $65.99 if you want an unplayed disc that’s absent of the allegedly “minor” scratches advertised in virtually all of the pre-owned listings.

You could theoretically get it for less if you decide to engage in one of the many bidding wars that are currently raging, and if you’re only in the market for the plastic case that contains the game for some reason, you’ll only have to drop $30 (thankfully, the manual is also included at that price so you can study the controls and various features of something you don’t have the ability play).

NCAA Football 14 was released on July 9, 2013, and a few months later, the only consoles you can use to play it began their slow march to obsoletion when the Xbox One and PS4 were introduced to the world within a week of each other in November.

The franchise’s annual installments may have never been “Game of the Year” contenders and were fairly overshadowed by Madden, which appropriately possessed a sleekness and prestige its college counterpart lacked (at least at the time). With that said, it provided college football fans with a more than adequate fix, and based on how the gameplay and overall experience had been refined over the years, there was good reason to look forward to seeing how the series would improve with the arrival of the next generation of video game consoles.

Sadly, we never got a chance to see, as everything came crashing down that September when EA Sports announced it would not be developing a new title after finding itself named in multiple lawsuits for illegally profiting off of college athletes who had their name, image, and likeness used.

One of those athletes was Ed O’Bannon, a former member of UCLA’s basketball team and the plaintiff in the O’Bannon v. NCAA trial, which served as the final nail in the coffin for college sports video games when a judge sided with him and the players he represented in the class-action case the following summer (a ruling that resulted in EA paying a sizeable chunk of the $40 million settlement that resulted).

Since then, there have been occasional glimmers of hope in addition to at least one unsanctioned alternative that attempted to fill the void EA failed to when it added a few college football programs to the career mode in the most recent iteration of Madden; a feature that only made people want more and led more than a few to ask the question that’s been on my mind recently: Why can’t they just make an NCAA Football game without using any real players?

Last year, the NCAA announced it was finally going to look into options that would allow its athletes to capitalize on their success without forfeiting their amateur status, and while Mark Emmert warned people not to get too excited about the potential return of the franchise, EA’s CEO said the company would be more than happy to get back into the college sports space if presented with the opportunity.

In April, the NCAA gave us our first look at its proposal, but according to people familiar with the matter, there are currently no plans to address the group licensing issue that serves as the biggest barrier to giving the people what they want, as it would require the creation of what would essentially be a players union and a subsequent agreement concerning fair compensation.

So what’s the solution here? It seems pretty simple: leave the players out of it.

At the risk of coming off like someone who is currently dictating everything you’re reading to a child laborer because I’m using one hand to smoke a cigar that was lit with a flaming $100 bill and the other to polish a monocle on my chinchilla coat, I’m not trying to suggest unions are a bad thing. College athletes should absolutely organize if they so desire but I don’t think they’re getting screwed over if the NCAA opts to make a new game before they do.

What would that game look like? Well, EA would really just have to pick up where it left off and continue to develop the features it was planning on introducing before NCAA Football 15 was aborted. That’s really it. We’re not trying to reinvent the wheel here, folks; it’s a video game that lets people play as their favorite college football team. That’s the entire pitch.

While looking into why this hasn’t already been done, I saw more than a few people who suggested it just wouldn’t be the same if you couldn’t play with actual players. It’s a fair point, and while I could be in the minority here, I always felt like the biggest appeal of the NCAA Football games was doing decidedly unrealistic things like creating a 6’8″ running back and coaching UMass to three consecutive national championships.

Additionally, the nature of college football means that most of the players you’re already familiar with will be nowhere to be found once you’re a few years into building a dynasty, but if you’re more of a “Play Now” person, I can understand why you might be skeptical of generic stand-ins.

There’s also an issue with how we’re defining “generic” as a whole here, as you’d assume fans would still want the game to be somewhat reflective of the current college football landscape. However, that raises some tricky questions about the ethics of having a team’s overall rating reflect its real-life talent level, as that score would ultimately be determined by the individual attributes of the actual players who aren’t being compensated.

EA previously showed us what a potential solution could look like when Barry Bonds forbid them from using his likeness in MVP Baseball 05, as he was replaced on the Giants roster by a fake player named Jon Dowd, a prototypical white guy with no resemblance to the slugger but all of the talent (Kevin Millar was also replaced by black guy with a blonde goatee named Anthony Friese).

However, it seems much more likely that the solution would be to harness a strategy that evenly distributes stats across an entire roster to still allow the Alabamas and Clemsons of the world to dominate while the Dukes and Kansas States are forever mired in mediocrity.

The only other major hurdle is the likeness problem I just touched on, as developers would need to dream up a way to consistently generate unique players that both reflect the typical body type of their respective positions and don’t fall victim to the truly randomized feature generation that can result in some absolute nightmare fuel.

Of course, all of these problems could be solved by giving people the option to change the skills and appearance of the players in the game but I would be very surprised if the ability to mod was included when the goal here is to step on the least number of toes as possible.

I don’t want to toot my own horn too loudly but I think this seems like a fairly feasible approach, which begs the ultimate question: Why hasn’t the NCAA harnessed a similar one?

As The Athletic noted earlier this month, the organization is currently using unspecified “legal hurdles” as its excuse, so it’s likely done some light risk-benefit analysis and determined the potential upside isn’t worth the risk of finding itself embroiled in another court case and potentially ending up on the hook for another sizeable payout.

It’s certainly a valid concern, but when you consider the potential profit that comes with resurrecting NCAA Football, you kind of have to wonder why the governing body wouldn’t attempt to address those legal issues with the aforementioned proposal, which isn’t slated to be finalized until next year.

Of course, plenty of things could change between now and then and I eagerly await the day I can write an all-caps headline filled with expletives and exclamation points announcing the return of the franchise. Here’s to hoping I won’t have to wait as long as I already have until that moment arrives.