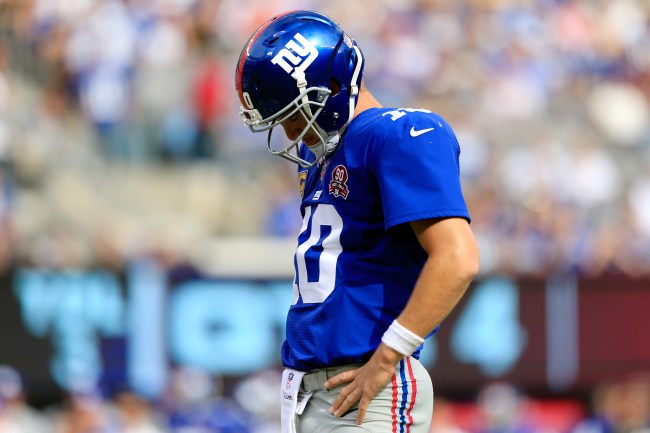 We’re now a few weeks into the post-Eli Manning, new-age Daniel Jones New York Giants, but that doesn’t mean we’ve gotten away from the eliteness of Mr. Manning.

Whether you’re a Giants fan, hate the Giants or the Manning family it’s impossible for you to deny the fact that Eli has blessed the Internet with a countless number of memes over the years.

During the Giants’ loss to the Patriots on Thursday night the sports gods smiled upon us yet again as a new Eli Manning meme was born, and it’s a great one. It all happened after Jones threw his third interception of the game and came to the bench visibily frustrated, but all Manning was worried about was his tablet.

Eli “I wanted to play on my tablet anyway” #NFL100 #NYGvsNE pic.twitter.com/1Ssdm5OFrl

Eli Manning: “I see here that you didn’t have one single receiver use their helmet to catch the ball…you know that’s how you beat the Patriots right?”

“So, Daniel, do I have to download the Internet first?” pic.twitter.com/nqG8VTue85

Adding up the scorecard after a rough round. pic.twitter.com/0aWdJ81GKW

EXCLUSIVE: This is what Eli Manning was looking at on his Microsoft Surface Pro Max XL Premium Tablet pic.twitter.com/we903yKGvM

Eli: Baby shark!
Jones: Eli no I have to focus on the ga-
Eli: BABY SHARK!
Jones: were not even supposed to use the tablet for that!
Eli: BABY SHAAAAARK
Jones: Fine!
Eli: Yaaaaaay doo doo doo pic.twitter.com/ms7VUugQl3

What’s even better about all of this is that in a Sports Illustrated piece published on Thursday Manning said he finds all of the memes hilarious.

He’s always liked it that way, the air of mystery, friends say. He’s found it hilarious, really, that his life has been reduced to a caricature, to memes and the Manning Face. Those closest to him—teammates, friends, family—all aver that the outside world has never understood the real Eli Manning, although in some ways neither have they. As Manning’s career has strained through its denouement, they, too, have often been left guessing at how Eli truly feels.

Now it’s officially impossible not to like Eli, sorry haters. You do you, you future Hall of Famer.