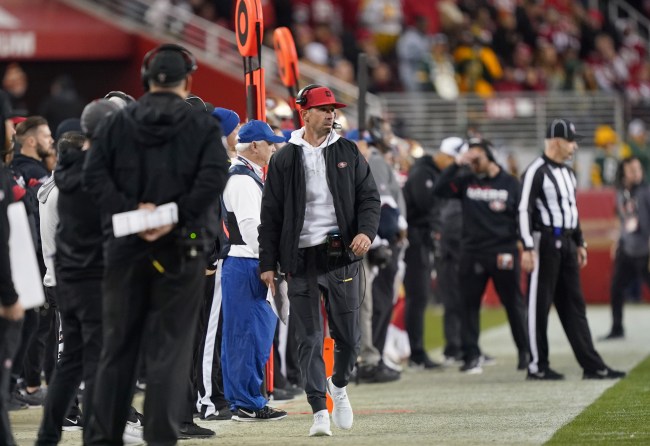 Being an NFL official is a tough task, nobody would refute that. Not only are these people supposed to know every single rule in the league — which all have intricacies that even diehard football fans don’t know about — refs are expected to act without bias when it comes to calling a game, which can be difficult given they’re human beings who can be impacted by the smallest of factors.

Although many football fans don’t want to admit that, it’s absolutely the truth. Just look at last year’s NFC Championship Game between the L.A. Rams and New Orleans Saints, when that obvious pass interference play wasn’t called — and how it was discovered that four NFL refs who officiated the game were from Southern California. It’s only natural for an NFL official to have some sort of personal feelings, whether they’ll ever admit it or not.

So what’s that have to do with Kyle Shanahan and the San Francisco 49ers, you ask? Well, video surfaced of the head coach predicting a pass interference call to an NFL official during this year’s NFC Championship Game against the Green Bay Packers before the ball was even snapped. Don’t get me wrong, that’s impressive AF, but does it not raise a little bit of concern, too? Take a look at the video below and judge for yourself.

Now, is there anything wrong with Shanahan working the official a little bit? Of course not, that’s what all coaches do. But to blatantly claim there’s pass interference and then have that same ref throw the flag seconds later isn’t a great look for the NFL — especially when officials have been under attack all season long for being inconsistent, to say the least.

On one hand, it shows how incredible Kyle Shanahan’s football mind is and how he’s able to see certain tendencies happening during games — as the Packers player was probably holding Niners’ receivers all game long. On the other hand, that an NFL official heard the claim from the head coach and tossed the flag immediately after sort of shows how easily swayed the zebras can be on any given play. This wasn’t lost on people who saw the video on Twitter, who had some mixed reactions.

That’s great but If that was Belichick there would be a congressional hearing and people would want him fired and banned from the league.

He’s about 7-8 yards deep with arm extension.. offensive pass interference. But we won’t talk about it.

This makes me a Packer fan, very very sad

He must have been buzzed from upstairs

Literally from the angle it looks like George is blocking him…. that was a BS call.

This probably isn’t a big deal in the grand scheme of things, as the 49ers pretty much walloped the Packers to capture the NFC title. However, as one person from Twitter pointed out, had this been a video of Patriots head coach Bill Belichick doing something similar to an NFL official, there would probably be a full-blown investigation from the league, so it’s just a matter of perception, I assume.