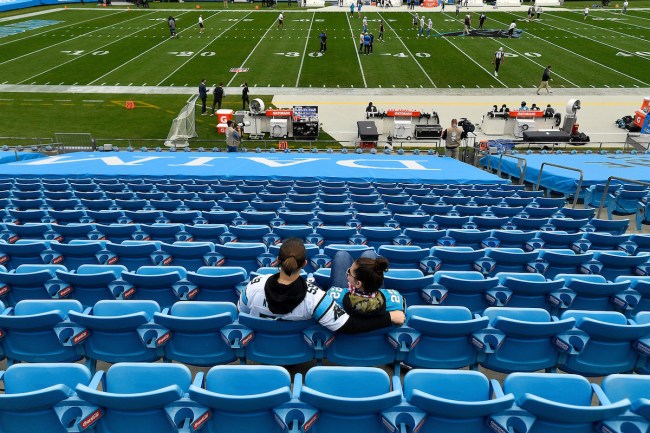 We’re more than halfway through the season, but it’s still weird AF not seeing packed NFL stadiums. Sure, maybe I’m just a baby who likes the atmosphere that comes with having a bunch of supporters screaming their heads off and drinking their body weight in alcohol to support their teams. Call me old fashioned in that way, I suppose. But there isn’t one football fan who actually enjoys the cardboard cutouts and/or stadiums with only 20 percent capacity, because it just doesn’t feel like a sporting event.

The good news? We may not have to endure this crap for much longer.

While we’re still fully in the middle of a pandemic that’s been going on since early this year — with cases continuing to rise and hospitals being packed, sadly — Dr. Anthony Fauci, the director of the National Institute of Allergy and Infectious Diseases, is staying hopeful that a return to normalcy can be achieved. And while we’re all looking to get back to life as we remember it before 2020, Dr. Fauci provided an optimistic update on when NFL stadiums might look normal again, too.

Speaking to Yahoo! Sports on Monday, the 79-year-old infectious disease specialist said that he foresees a real possibility of stadiums being packed again by the kick-off of next NFL season in September. While that may not be as soon as some of us would prefer, if it means we’re completely out of this pandemic and don’t need to worry about COVID any longer, we should all be here for it.

“We’re gonna be vaccinating the highest-priority people [from] the end of December through January, February, March,” Fauci said. “By the time you get to the general public, the people who’ll be going to the basketball games, who don’t have any underlying conditions, that’s gonna be starting the end of April, May, June. So it probably will be well into the end of the summer before you can really feel comfortable [with full sports stadiums] – if a lot of people get vaccinated. I don’t think we’re going to be that normal in July. I think it probably would be by the end of the summer.”

Look, I totally understand that packing NFL stadiums again isn’t the first thing many people are prioritizing when it comes to living normally again, but it’s certainly positive news to hear Dr. Fauci say he thinks 70,000+ people could safely be around one another without masks and social distancing. But it’s going to take a little effort to get there.

Not only will Americans need to buckle down these next few months to limit the spread of COVID, but Dr. Fauci also said the majority of the population will need to trust in science and the development of the vaccines — which are set to be approved and distributed sometime this month.

“We could get there by the end of the summer, and as we get into the fall of next year,” Fauci continued. “But if 50% of the people say, ‘You know, I don’t want to get vaccinated,’ then it’s gonna take considerably longer than that.”

As for other sporting events, Dr. Fauci wasn’t as hopeful about NBA arenas being packed with 20,000+ people by the summer or early fall, saying it’s “cutting it close” to expect that. He added that getting places like NFL stadiums and other arenas back to full capacity isn’t all that high on the priority list, saying sports stadiums will be among the “last thing[s] that you’re gonna see” as we try to overcome the pandemic.

But with some hope that sports can return to normal for fans by the end of summer, we should all be excited about the possibility. Now let’s just hope we all beat this pandemic in the coming months.