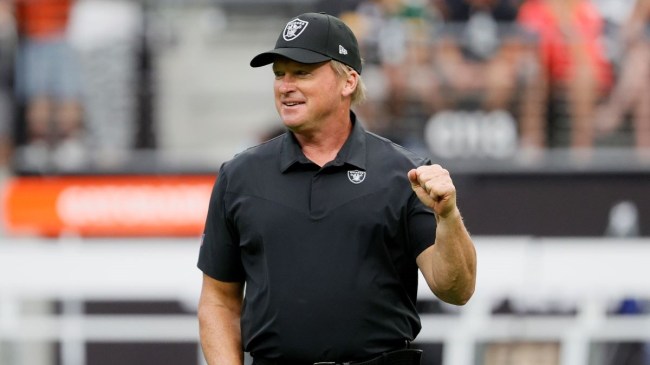 It’s been nearly a year since Jon Gruden resigned as the head coach of the Las Vegas Raiders over his racist and misogynistic emails. In addition to the grossly offensive emails, Gruden also took aim at NFL commissioner Roger Goodell. Among other things, Gruden called Goodell a “clueless, anti-football p*ssy.”

Since then, Gruden has blamed just about everybody other than himself for being forced out of the league. Additionally, he and others around the league believe that the NFL deliberately leaked the emails to the press to force him out.

Gruden believes this so much that he’s opted to sue the league. The NFL has repeatedly attempted to get the suit thrown out, but to no avail. Now it appears the league is truly starting to show concern over the legal proceeding.

A.J. Perez of Front Office Sports reported on Friday that sources around the league feel there’s a “growing concern around the NFL about the litigation.”

The source of the leaked emails obtained during the course of the first NFL outside investigation into the Commanders has been debated for months. The Commanders and Snyder — who faced five new investigations after the emails were published — have also denied being the source.

“Somebody wanted Gruden out,” a source told FOS. – via Front Office Sports

The NFL filed a motion to dismiss to the case in May. But District Court Judge Nancy Allf denied the NFL’s motions to dismiss the case. Allf also denied another motion that would have taken the dispute to arbitration.

Allf’s rulings mean not only will the case remain in this Nevada court, but it also sets the stage for discovery where Gruden’s legal team could get access to who was behind the leak of the racist, sexist, and homophobic emails that led to his resignation in October. – FOS

Somebody, somewhere knows where the leaks came from. And it’s becoming increasingly clear that they don’t want the public to know the answer.