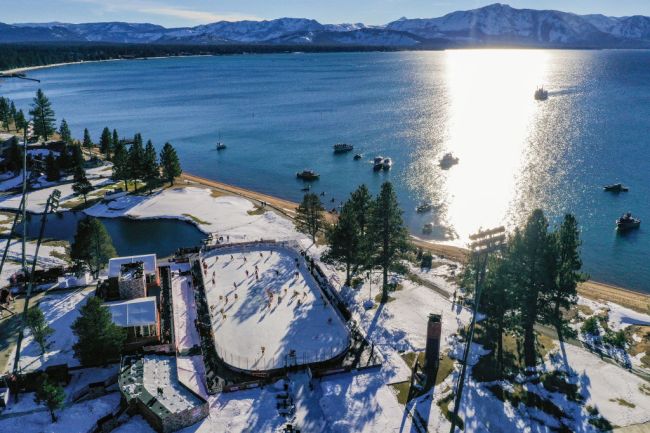 What the NHL did with its Outdoor Series over the weekend was remarkable. Sure, the ice conditions caused a nine-hour delay in Saturday’s game, but Sunday went off without a hitch and the images that came from the two games significantly outweigh any of the issues.

The views from Lake Tahoe are a truly beautiful sight #NHLOutdoors 🏒🌲 pic.twitter.com/jz92UfUQYu

With the limited fan attendance in 2021, the league was forced to cancel their Winter Classic and Stadium Series games and decided to experiment with something different. It announced two games in Lake Tahoe, Nevada at the Edgewood Tahoe Resort in early January and had a pretty quick turnaround to get it together. Vegas played Colorado on Saturday and Philadelphia faced Boston on Sunday night. The resort is known for hosting the American Century Championship, a popular celebrity golf tournament, and the NHL dropped a rink amongst the western pines at the foothills of the Sierra Nevada and Carson mountain ranges. Much like the Field of Dreams, they built it and they came. It was beautiful.

The picture doesn’t do it justice, but as the Golden Knights practice, the rainbow is still there on Lake Tahoe. #NHLOutdoors pic.twitter.com/iNk96ShUrT

LOOK AT THAT VIEW!#AnytimeAnywhere vs. #NHLBruins

The first game began in the afternoon but was put on pause for nine hours while the sun went down and the ice refroze. As a result, it began in the sun and finished in the dark. Sunday’s late-evening bout was a different story and the sunset resulted in the most beautiful, aesthetically-pleasing goals of all-time. Charlie McAvoy scored the first and David Pastrnak scored the second moments before the sun went down past the mountains.

Fans were not allowed to attend, but that didn’t stop a handful of hockey faithful from doing whatever they could to get a peek. People pulled up in their yachts, fishing boats or kayaks and made the experience just that much more fun. Especially the goodest boy!

"Grab a ladder and hop in the lake with a friend." 😂

The #NHLBruins have some fans watching from the beach. #NHLOutdoors pic.twitter.com/yeo0fajzzx

There is a guy on a jet ski wearing a @DetroitRedWings jersey and flying a Red Wings flag. #NHLOutdoors pic.twitter.com/yBDYOopqLz

No fans allowed at today’s #NHLOutdoors game between the Knights and the Avs but if you’ve got a boat or a kayak you can get a peek 😂😂#VegasBorn pic.twitter.com/mWfNEgd8d6

Everything about this series was awesome. The NHL hasn’t said yet whether it will continue into upcoming seasons, but after the buzz it created, I don’t see how it doesn’t. While you can’t necessarily sell tickets, concessions, etc., it surely can’t hurt to play two outdoor games each season. Imagine the possibilities?

Let us know in the comments where you want next season’s NHL Outdoors series to be played!