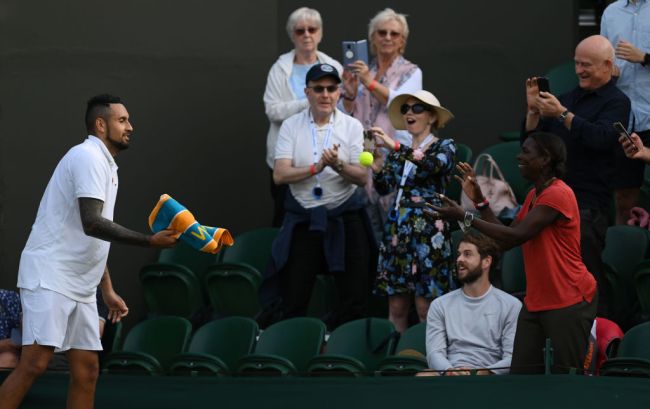 Nobody in tennis is as polarizing as Nick Kyrgios. Sure, the Rafael Nadals and Roger Federers of the world remain must-see TV every time they are on the court, but they are not nearly as entertaining as the 26-year-old Australian. He simply does not care what you think of him and does what he wants.

Whether it be sleeping with fans on a weekly basis, eviscerating tournament officials without a care or telling his friend that he doesn’t like his girlfriend mid-match, Kyrgios is going to Kyrgios. That was the case on Thursday.

During the unseeded match against Gianluca Mager, Kyrgios was playing tough. He won the first set in a tiebreak and then won the second 6-4. After going ahead 6-4 in the final set, Kyrgios held match point.

Prior to his serve, he walked over to the fans and asked where to serve. Kyrgios followed the advice and won the point, savagely moving his racket out of the way on a return and pointing to the fan.

Nick Kyrgios asking a fan where he should serve on match point. Just delightful. 🍓 pic.twitter.com/nB4JNkduVI

This final point move came just two days after similar hilarious antics. On match point in the first round, Kyrgios pretended to underhand serve before smashing home an ace to win.

The move was even better because back February, at the U.S. Open, Kyrgios actually served one of his set points underhand.

Nick Kyrgios using a underarm serve to win the set is such a savage move ☠️ #AusOpen pic.twitter.com/YAOxGDTiUd

Kyrgios will face 20-year-old and 16-seed Felix Auger-Aliassime in the third round. COVID-19 rules prohibit too much outside contact for the players, but perhaps he will sneak out to the pub for a celebratory pint. He did so a few years back and ran into a reporter the next day.

Throwback to when Nick Kyrgios recognised a Wimbledon reporter from the pub 😂🍺 pic.twitter.com/a1IyZJsfLD

“Not everyone can be a Federer or Djokovic or Nadal. These are, like, once-in-a-decade athletes that inspire millions of people. Like, they’re just gods. I see them as that, too,” said Kyrgios after his second round win. “But you have to have some people, I believe, that are relatable, that people can bring other fans to watch, like people that are just normal. I feel like I’m one of those people. I’m Nick Kyrgios. I know who I am.”

Like him or love him, Kyrgios is a polarizing superstar.