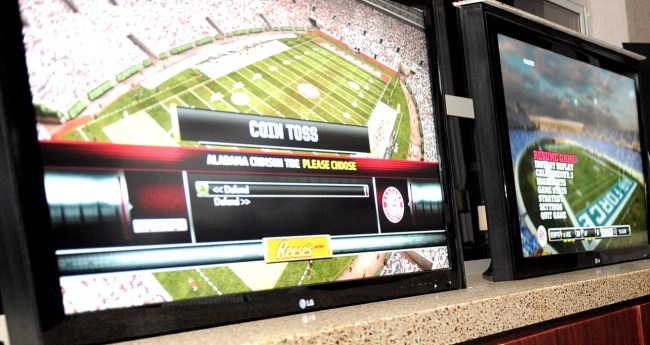 While college football fans everywhere were understandably very excited about EA Sports’ NCAA Football franchise officially coming back from the dead, there were still obviously many hurdles to overcome before it could actually become a reality.

EA Sports made that much pretty apparent when it was reported that it could still be two or three years before the game returns.

The biggest sticking point, obviously, is how Electronic Arts will handle the Name, Image, Likeness (NIL) issue and how players who appear in the game will be paid.

Universities like USC have already moved forward with steps to assist their athletes in the transition to pay for play.

In Florida, the governor signed a Name, Image, Likeness bill allowing college athletes in that state to make money from endorsements.

EA Sports claims the revived title will include over 100 schools and “feature the logos, stadiums, uniforms, [and] gameday traditions.”

That plan has already hit a couple of snags, however.

Notre Dame athletic director Jack Swarbrick has already stated that the Fighting Irish, under the current rules, will not be participating.

In addition to Notre Dame, on Wednesday Chicago Sun-Times reporter Steve Greenberg revealed that Northwestern University of the Big Ten will also be opting out.

“Some news: Like Notre Dame, Northwestern will not be participating in the next version of EA Sports College Football until rules are created and finalized that allow players to benefit financially from use of their names, images, performance histories, etc,” Greenberg wrote on Twitter.

“Notre Dame was the first school to publicly announce its decision to hold off on joining the 100-plus schools already signed on to participate. Northwestern made its decision last month, according to an athletic department spokesman.

“Illinois, like the vast majority of FBS schools, signed its commitment with Collegiate Licensing Company. According to a spokesman, Illinois is under the impression that, if new NIL rules are passed, EA intends to change its plan to include players with compensation,” Greenberg continued.

“‘Our approval allows Illinois to be included in the development process,'” the spokesman said, “‘and we would be supportive of any changes EA may incorporate should NIL pass.'”

Basically, until there is some universal agreement among NCAA football schools as to how, and how much their players will be allowed to be paid, something that will also have to be approved by the players, we are potentially in for a very, very long wait for a new version of NCAA Football.

So it looks like we’re still going to need to keep updating our ancient version of NCAA Football 14 until all of that happens.

UPDATE: A statement from EA Sports.

“While it’s early days in our return to College Football, we are committed to creating an authentic college football experience. We’ve said from the start that player name, image and likeness is not currently planned for the game. However, we are watching the developments in this area closely and are prepared to take steps to include players should that opportunity arise. In the meantime, we’re continuing to work with our partners at CLC to ensure the diverse traditions, pageantry and passion of the more than 100 institutions already signed on to be featured in the game come to life.”