O.J. Simpson Finally Revealed How He Would Have Committed The Murders He Totally Didn’t Commit 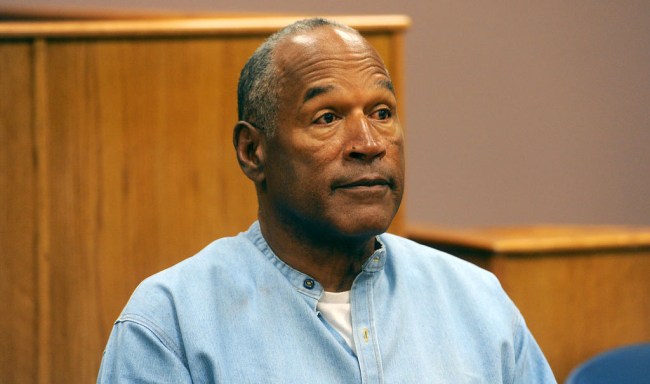 If you watched the first season of American Crime Story, the 30 For 30 documenting the events that inspired it, or were old enough to actually remember watching O.J. Simpson lead seemingly every single law enforcement officer in Los Angeles on a slow-speed highway chase in a white Ford Bronco, then you’re undoubtedly familiar with the technically unsolved murders of his ex-wife Nicole Brown and Ron Goldman.

Simpson visited seemingly every single golf course in America on the hunt for whoever was responsible for the killings after he was acquitted in 1995 until karma did everyone a favor 12 years later when he was arrested for armed robbery and kidnapping in an ill-fated sports memorabilia exchange in a Las Vegas hotel room. An LAPD officer theorized Simpson would admit to the killings after he was released from prison, but the finally-convicted felon hasn’t come clean since being released on parole last summer.

However, Fox recently reminded everyone that Simpson basically confessed over a decade ago when they announced they’d be airing an interview he conducted prior to the release of the eventually unreleased If I Did It, a book that laid out how he would have pulled off the double murder if he had, in fact, played a role. They aired the footage last night in a truly bizarre special that really only leads to one conclusion: he definitely did that shit.

He also talked about blacking out before coming back to his senses covered in blood in a clip that ends with him laughing hysterically for no apparent reason:

"Taking the knife from Charlie, and to be honest, after that I don't remember. Except I'm standing there and there's all kind of stuff around … blood and stuff around…" *breaks into laughter* – O.J. Simpson #DidOJConfess pic.twitter.com/eZA27EERli

At some point in the interview, God realized it would be a good idea to stop letting Simpson say the word “hypothetically,” and he had essentially confessed to the killings by the time it came to the end:

#OJSimpson just confessed to murder. He stopped saying this scenario was hypothetical and started speaking about the murders in first person. This monster admitted killing his ex-wife in 2006 and the interview was buried. #DidOJConfess pic.twitter.com/Gmbcd6tmMb

If it makes you feel any less gross, the Brown and Goldman families— who were awarded millions of dollars in (largely unpaid) damages in a civil suit— were consulted before the interview was aired and gave the network their blessing. They might never get the entire truth, but this has to count for something.