Oklahoma Reportedly Tells Cheerleaders To Not Flash The ‘Horns Down’ Sign, Because The World Has Gone Soft 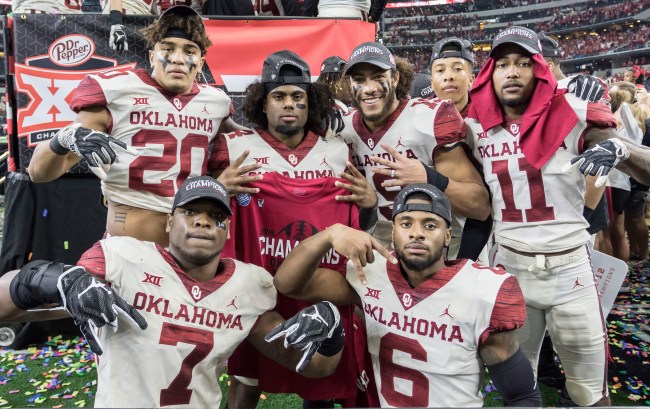 There really isn’t anything in sports like the rivalries between college football teams. Army-Navy, Ohio State-Michigan, Alabama-Auburn. Just the mere mention of those games gets fans fired up.

Another one of those legendary rivalries is Oklahoma-Texas.

Former Sooners coach Barry Switzer summed it up best, saying, “I guess I don’t hate Texas. I just want to beat their ass.”

That’s exactly what makes for a great rivalry.

And for more than 50 years Oklahoma fans and players have showed their disdain for the rival Longhorns by flashing the “horns down” sign – i.e. the reverse of the traditional “Hook ’em Horns” sign that Texas supporters routinely display.

The powers that be are trying to make that a thing of the past, however, because God forbid someone’s feelings get hurt.

This past summer, Big 12 coordinator of officials Greg Burks informed the media that players who flash the horns down sign could face a possible unsportsmanlike penalty, similar to what happened to West Virginia quarterback Will Grier during the 2018 college football season when he flashed the sign at UT fans near the end zone.

WILL GRIER. 2-POINT CONVERSION WITH THE GAME ON THE LINE.

This man's got ice in his veins, y'all. pic.twitter.com/CQikTxeA8J

Now, according to OUDaily.com, the University of Oklahoma doesn’t even want their cheerleaders to do the horns down sign. Oh, and that they all need to delete any social media pictures they have of the horns down hand gesture as well.

Seven student members from across OU’s spirit teams, including the cheer squad, RUF/NEKS, Lil’ Sis and mascots programs, have told The Daily they’ve been instructed by OU Spirit Coordinator Phil O’Neill not to use the hand sign. The students, some of whom have graduated and some who remain in the program, all shared the information on the condition of anonymity. Their identities are known to The Daily.

According to the sources, on several occasions, including at a meeting in August 2018, O’Neill told the students they were not allowed to use the hand symbol. O’Neill informed them that any use of the hand symbol on social media would be asked to be removed. Several sources told The Daily they have been asked to delete posts with horns down in them over the past two years.

These same sources also reported that as recently as the 2017-2018 season, flashing the horns down wasn’t considered an issue. According to OU Daily, “spirit squads were strongly encouraged to do it only at the OU-Texas game.”

Naturally, this is not sitting well with Sooners fans and players.

“That’s just history. It’s tradition. They don’t like us, we don’t like them. They throw horns up, we throw them down,” said legendary former Oklahoma safety Roy Williams. “I guess you can take it as disrespect, but who gives a rat’s ass? This is football. If you’re hurt because we’re throwing the horns down, stop allowing us to beat your ass.”

Also, don’t Oklahoma administrators know what banning something like the horns down symbol does?

Cody Havard, an associate professor of sport commerce at the University of Memphis, and University of Texas graduate, stated, “You have to consider the potential that when it wasn’t a huge deal and it wasn’t something that people got real upset about, that it was more fun. What do we do as humans when something is taken away? We want more of it.”