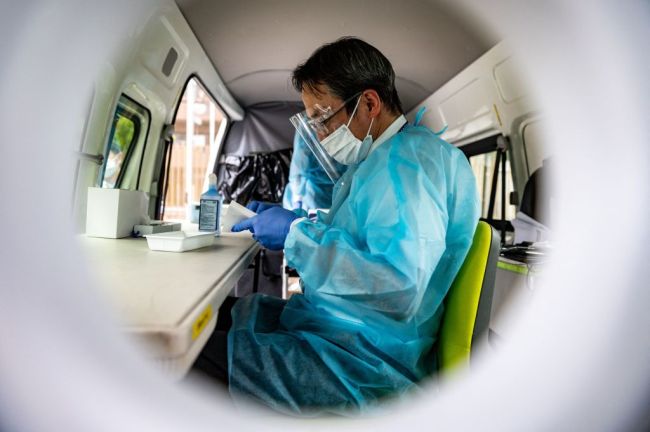 And so it begins. Less than a month out from the 2020 Tokyo Olympics, positive COVID-19 tests are causing concern amongst Japanese health officials.

If the Games have not even begun and COVID-19 is already a problem, it doesn’t bode well for them to go according to plan. The upcoming Olympics are going to be a mess.

The outbreak began on Saturday when a Ugandan coach tested positive at Tokyo’s Narita International Airport. He was quarantined there, but the rest of the nine-person traveling party was allowed to travel more than 300 miles to their pre-Olympics camp in Osaka.

Three days later, a second member of the team tested positive. The positive result forced seven town officials and drivers to self-isolate while the team was quarantined at a local hotel.

While the others who were in close contact with the COVID-positive team members have not tested positive (yet), concerns only continue to escalate. Both members who tested positive had the delta variant of the virus, which is more contagious.

Meanwhile, Chief Cabinet Secretary Katsunobu Kato said on Monday that Japan will step up quarantine requirements for Olympic athletes and team members from areas where the delta strain is common.

Travelers will be required daily virus tests for seven days prior to departure to Japan— up from the current four days. in addition, the athletes will train in isolation for the first three days and must test negative for 14 days after entry.

Osaka Governor Hirofumi Yoshimura said that the entire team should have been quarantined at the airport. Japanese government officials defended airport protocols.

Instead, they said, local health officials are responsible for contact tracing and isolation.

“No matter what measures you take, infected people would come in and it is unavoidable,” he said at a news conference in Tokyo. “Strict border control at airports is extremely important.”

Tokyo recently eased its state of emergency on June 21st, but warned of a resurgence. On Monday, the host city reported 317 new cases, up from 236 a week prior. It was the ninth consecutive day with an increase of delta variant cases.

Things aren’t looking good and no one is willing to take responsibility. Thus, the outlook is grim.

If clusters are forming and causing problems with a month before the Games, imagine what is going to happen when all of the athletes convene on the country at once? It’s going to be chaos.

Alcohol and cheering have already been banned for the limited-capacity crowds, making this the least fun Games ever. However, we should be grateful if they continue on as scheduled, because that’s starting to look more and more unlikely. Keep your hopes, but don’t let them get too high.