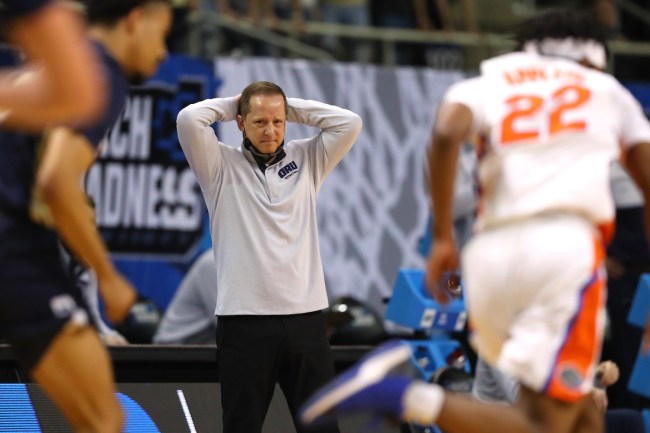 The Oral Roberts basketball team have absolutely distinguished themselves as the “Cinderella” of this year’s March Madness, with the 15-seeded Golden Eagles already knocking off 2-seeded Ohio State and 7-seeded Florida to reach the Sweet 16. It’s been quite the run thus far, and it’ll be interesting to see just how far this team — led by head coach Paul Mills — can really go.

While the Golden Eagles have proven to be a talented bunch of scrappy players, none of this should really be much of a surprise. After all, most teams take on the identity of their head coach, and, after hearing a recent story told by Paul Mills about nearly coming to blows with actor Kevin Bacon in a barbershop, it’s easy to understand why the Oral Roberts basketball team has so much bite in them.

Joining the crew on The Field of 68 podcast, Mills went into detail about how he and the Golden Globe winning actor nearly threw down while in a barberbshop. The first part of the story starts in the tweet below, while the rest of it can be seen in the YouTube video.

The last time we had a 15-seed make the Sweet 16, the coach had quit Wall Street to coach and was married to a Maxim model.

This year, as a 15-seed returns to the tournament, their coach is … a guy that tried to fight Kevin Bacon in a barbershop?

Look, many people like to comment about how wild somebody else’s life is, but, after hearing the Oral Roberts basketball head coach talk about nearly fighting Kevin Bacon, it’s clear that Paul Mills’ life really is insane. Not only is he becoming a March Madness legend by leading his Golden Eagles to great heights in this year’s NCAA Tournament, but he nearly fought an A-list celebrity — and lived to tell about it. That’s impressive.

Given the whole Six Degrees of Kevin Bacon thing, maybe none of us should be that shocked that the head coach of this year’s March Madness surprise squad has a firsthand experience with the actor. I mean, after seeing the crazy upsets in the tourney this year, it’s only fitting that Paul Mills’ feistiness was nearly put to the test and he almost threw some fisticuffs to stand his ground. Now that’s the type of coach any player should want to play for.