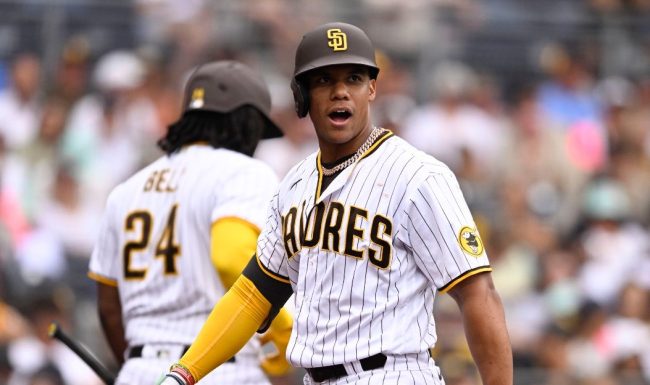 The San Diego Padres made a massive move to improve their chances of winning a World Series. After trading for Juan Soto, Josh Bell, and Josh Hader, this franchise has the lineup and pitching rotation to go the distance. However, the front office has spent an incredible amount of money over the last two years and opposing MLB executives can’t wrap their minds around it.

MLB Execs Are Completely Befuddled By The Padres Spending Habits

According to The Athletic, some MLB execs are totally confused by what’s going on in San Diego. The Padres have built an amazing roster, there is no question about that. Regardless, opposing executives are left scratching their heads wondering how in the world the Padres are paying for their roster.

The Padres have blown through the luxury-tax threshold for the second straight year.

The front office has dished out plenty of cash these last two years which has generated one of MLB’s most talented teams. Once Fernando Tatis Jr. comes back to full health, the Padres are going to be tough to stop. He’ll be joining a lineup consisting of Juan Soto, Josh Bell, and Manny Machado. Additionally, Josh Hader joins a rotation involving Joe Musgrove.

Although MLB executives are confused by San Diego’s approach, it’s not hard to see why the franchise went this route. The Los Angeles Dodgers have been at the top of the NL West for years. They won the World Series back in 2020 and are a legitimate contender once again. For that reason, the Padres have gone all in to finally surpass their bitter rival, making this a bold, but smart strategy.

We’ll see how it all plays out. San Diego is in a prime position to make a serious run in the postseason. Especially once Fernando Tatis Jr. returns to the lineup. Look for the Padres to potentially continue this strategy next year as well to keep improving the roster. That is if they can somehow find a way to afford it.