A Look Back At Patrick Mahomes And Baker Mayfield Combining For 1,382 Yards, 14 TDs In One Game 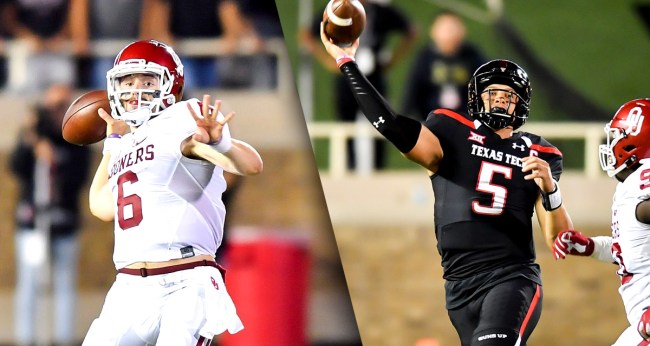 This weekend Patrick Mahomes of the Kansas City Chiefs and Baker Mayfield of the Cleveland Browns will once again go head-to-head on the football field.

This won’t be the first time these two quarterbacks have met on the field. Back in 2018, Mahomes in his first year as the Chiefs’ starter, met Mayfield, then a rookie, and they combined to put up 58 points and 887 yards of total offense with Mahomes throwing for 375 yards and Mayfield passing for 297. (The Chiefs won the game 37 to 21.)

Quite an impressive showing by the two young QBs, but that was nothing compared to their previous matchup of Oct. 22, 2016 when the two of them were still in college.

As you will recall if you are any kind of football fan, Mahomes and Mayfield combined in that game to score 125 points and led their teams to a combined 1,708 yards of total offense.

Strangely enough, each team had the exact same total of 854 yards of offense that day.

Mayfield’s Sooners took home the dub with a 66 to 59 victory, but Mahomes was the one setting records.

In that game, Mahomes, then a junior, put up 819 total yards of offense ALL BY HIMSELF, throwing for 734 yards and leading the Red Raiders with 85 yards rushing. He also accounted for seven total touchdowns, five passing and two running.

On the other side of the ball, Mayfield was nearly as impressive, passing for 545 yards and seven touchdowns.

On top of that, Sooners running back Joe Mixon had 377 total yards of total offense that day – 263 on the ground and 114 receiving. Oklahoma wide receiver Dede Westbrook added another 202 yards and two touchdowns. And Keke Coutee had 172 yards receiving and a score for Texas Tech.

So, do you think these two are excited to strap it up for one more big game this coming Sunday? You bet they are.

“Obviously it’s cool to get to play against him in such a big game in the playoffs and everything like that,” Mahomes said in a press conference on Wednesday. “I’ve known him for a long time, since I was a senior in high school. And to be able to play on this stage is going to be special. He went to Oklahoma, I went to Texas Tech. He got the better of me in college, so I’ll try to do my best to win in the NFL.”

As for Mayfield, he told the media this week, “He has gotten me so far in the league so I have to see what I can do. It’s always been fun to keep up with Pat.”