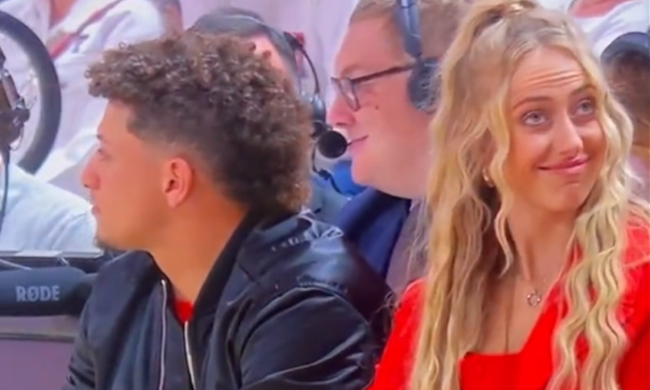 Patrick Mahomes and his fiancée Brittany Matthews are a lightning rod for comments on the internet. Of course, that is because Matthews is far and away the most polarizing person associated with any of the 1,696 players on NFL teams’ active rosters in 2021. (Though Patrick’s brother Jackson Mahomes might be giving her a run for her money in that regard.)

By doing things like dousing fans with champagne and creating “Team Brittany” shirts to making TikTok videos on the sidelines during NFL games and pouring water on fans, Brittany and Jackson are the most annoying and insufferable people related to any single player in the NFL, and it’s not even close.

Related: Pat McAfee Thinks Patrick Mahomes Needs To Reign In His Fiancée And Brother, The ‘Tag Team Of Insufferabilty’

So when fans spotted Patrick Mahomes and his fiancée Brittany Matthews sitting courtside at the Texas Tech versus Baylor game Wednesday night, they couldn’t wait to get their fingers on a keyboard.

Even more so when the couple were seen having a conversation in which whatever it was that Mahomes told Matthews resulted in her making some very odd faces to a person sitting next to her.

Poor Patrick. Have to feel for the guy. pic.twitter.com/IOoB3f3VAp

After people started commenting on the couple, and not very nicely, Patrick Mahomes took to Twitter to defend his fiancée.

That didn’t stop the internet from doing what it does best: taking a potential comedic situation captured on video and turning it into a pile of spectacular memes.

You sure about that? pic.twitter.com/xCH2T7MXgp

When she got you for 18 years pic.twitter.com/pifiDdc6iJ

The internet also had a lot of fun with Patrick Mahomes’ tweet defending his fiancée Brittany, though there seemed to be a common theme.

Are you safe right now? pic.twitter.com/mLdn3Gjwb1

Yes but this is totally normal pic.twitter.com/PVY3Y5YA97

Brittany we know it’s you tweeting this…

Brittany after seeing the memes pic.twitter.com/a8XRcJCYL9