Pat McAfee Thinks Patrick Mahomes Needs To Reign In His Fiancée And Brother, The ‘Tag Team Of Insufferabilty’ 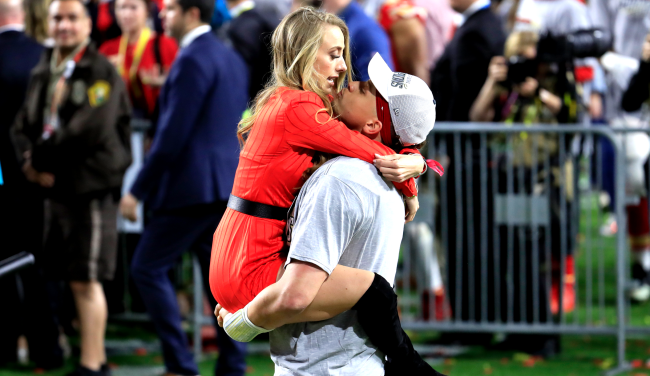 Without a shadow of a doubt, Patrick Mahomes’ fiancée Brittany Matthews and his brother Jackson Mahomes are the most polarizing family members of any single NFL player.

Which is really saying something because there were a total of 1,696 players on NFL teams’ active rosters in 2021.

And it’s not even close.

Sure, Zach Wilson’s mom stirred things up there for awhile, but her son was a rookie and eventually she calmed down as the season progressed.

Other than that, we heard barely a peep out of anyone related to an NFL player this season, unless it was something positive.

Brittany Matthews and Jackson Mahomes, in Patrick’s FIFTH season in the NFL, have only dialed things up to 11.

From dousing fans with champagne and creating “Team Brittany” shirts to making TikTok videos on the sidelines during NFL games and pouring water on fans, no one has come even close to being as annoying and insufferable as the Mahomes crew.

All of which truly beg the question, how much of a distraction are Brittany and Jackson’s antics to one of the best football players in the league, Patrick Mahomes?

Should Patrick Mahomes tell his fiancée and brother to tone it down?

According to someone who would know better than most, former NFL punter Pat McAfee, it’s a legitimate question.

“It’s going to be a long off-season for those two, I think,” McAfee said Thursday on his show. “I think there’s going to be some personal growth this off-season. And this is not just about Patrick losing in the AFC Championship.”

“There are some people in this studio that are Team Brittany and this is not one of those things, but they’ve been thrusted into the spotlight as well at a young age, right?

“Off the field, there’s videos obviously surfacing from the tag team of insufferabilty over there. I mean, there is just a lot of stuff, but I think next season, we’ll see a very different group.”

McAfee added, “This off-season there’s going to be a lot of reflection … and I wonder if they’ll have a family sit down and just be like, ‘It feels like everybody likes me personally. I know this is very selfish to say because football is a team sport and the family is a family thing, but boy, it does feel like the only bulls–t I really deal with is, is because of you two right there.’”

He also pointed out that while Brittany Matthews and Jackson Mahomes may think they are growing their “brands” it appears as though the only times the two of them are trending on social media is when they do something negative.

Definitely some food for thought for Patrick Mahomes this off-season.