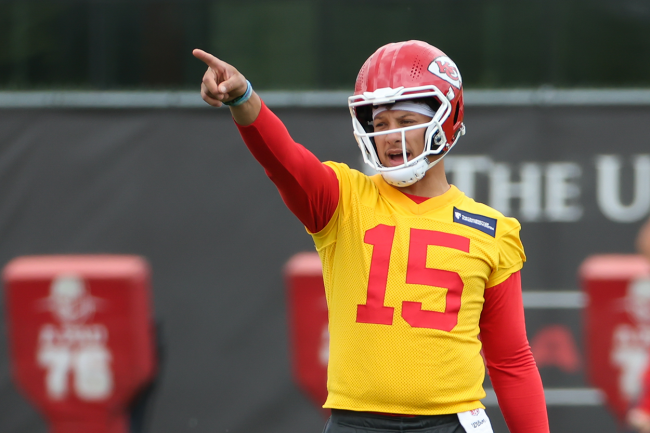 Patrick Mahomes is simply absurd. Every single time that he touches a football, he is going to do something crazy.

This year’s training camp has not been the exception. The 26-year-old continues to do ridiculous things each and every day.

It all started at the beginning of camp when Mahomes wouldn’t stop practicing behind-the-back throws to the point that it makes you wonder if he will actually try to pull it off in a game. And then on Tuesday morning, the Chiefs quarterback was back at it with a new wrinkle.

Not only was Mahomes going behind-the-back, he was going between-the-legs. Literally.

At one point on Tuesday, Mahomes took the snap from his center and threw a pass behind him through his legs. It’s to the point that he must be trolling us all.

But he wasn’t done there.

Once the day had all-but wrapped, Mahomes did some more wizard-like magic. He lined up at the 20-yard-line and used his throwing arm to go behind-the-back and unleash a laser.

While that would have been cool in itself, where the ball landed makes it even cooler. Mahomes threw it the full 20 yards in the air and hit the crossbar on the goalpost at dead center. It wasn’t to the left, it wasn’t to the right. It was dead center.

And then, as if it wasn’t enough to go behind-the-back, Mahomes did the exact same thing throwing normally— but with his non-throwing hand.

Slingin' em behind the back AND left-handed 😨 @PatrickMahomes pic.twitter.com/h0tNgqr97S

He is truly insane. There is no other player like Mahomes in the NFL and he continues to put on a show with everything that he does.