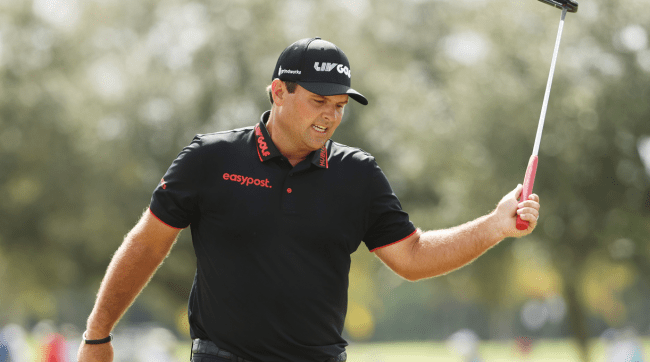 To call pro golfer Patrick Reed polarizing would be a huge understatement.

It seems that no matter what he does, golf fans have opinions about him – and they’re usually not positive.

Of course, he doesn’t help matters when he does things like filing a $750 million lawsuit against Golf Channel’s Brandel Chamblee (later amended to $820 million) and repeatedly does things on the course that some people think is cheating.

Not that any of that is slowing Captain America down. He’s got nine PGA Tour wins and last summer he signed a lucrative new deal to play for LIV Golf.

And it’s comments about that particular association that has Patrick Reed once again in a tizzy, threatening to file a $450 million lawsuit.

Reed apparently took great offense to remarks made by Jake Tapper and Bob Costas during a recent segment on CNN.

In a letter sent out to the media by Reed’s lawyers at the Klayman Law Group to Tapper, Costas, CNN CEO Chris Licht and CNN General Counsel David Vigilante, attorney Larry Klayman writes…

This widely viewed broadcast in Florida, the nation and internationally, was not only defamatory but also designed to incite ridicule, hatred and violence against LIV Golf players, such as my client Patrick Reed, a world champion professional golfer, by publishing that he takes “blood money” from the Saudi Public Investment Fund, in the wake of the 9/11 tragedy twenty-two (22) years ago. The article also, at a minimum, falsely implies that he using a lawsuit, of which he is not even a party, to dig up data, track down, intimidate and harass 9/11 victim families. The broadcast republishes with reckless disregard for the truth, a prior Bloomberg article, and references the Bloomberg article in the broadcast. See attached.

At one time, I had known Jake Tapper to a moderately honest journalist and commentator, but after the election of President Donald Trump, he sold his soul to the hierarchy of CNN, then headed by rabid Trump-hater Jeff Zucker. Ever since, CNN and Tapper pliantly have been on a
crusade to destroy Trump, which crusade apparently appeals to CNN’s generally leftist viewership, and reaps profit for the network. Interestingly, a person with the last name Zucker is referenced in the subject broadcast.

While Jeff Zucker has since been fired at the CEO of CNN over alleged misconduct with a subordinate at CNN, his legacy as a Trump-hater lives on and Tapper continues his unhinged vicious attacks on not just Trump but anyone and anything associated with him, such as LIV Golf, which simply played two events at the former president’s golfing venues in New Jersey and Florida last year, which LIV Golf payed for.

Needless to say, in addition all of the other misleading and false statements about LIV Golf in the subject broadcast, which at a minimum amount to defamation per se, defamation generally, and defamation by implication under Florida law, having branded Mr. Reed – and clearly what is published is “of and concerning” him as LIV Golf player and thus a taker of “blood money” as Tapper put it, this defamation is clearly actionable as to Mr. Reed.

Mr. Reed is not a taker of “blood money,” as he simply plays on a golf tour financed by the Saudi Public Investment Fund, which also owns large shares in a myriad of American companies such as Disney, Boeing, J.P. Morgan Chase, Amazon, Blackrock Inc., Microsoft and many others. Indeed, many sponsors of the PGA Tour benefit from this investment fund, and PGA Tour players have recently been granted releases by the PGA Tour to play in the Saudi International Golf Tournament in Jeddah, on February 2-5, 2023, also financed by the Saudi Public Investment Fund. Aramco, the oil company owned by the government of Saudi Arabia, also sponsors and finances a number of LPGA events. Are you accusing female professional golfers of also taking “blood money?”

Tapper, Costas and CNN are therefore on notice that if an on air public apology is not immediately made to Mr. Reed and the broadcast removed and retracted from CNN’s websites, streaming services and other forms of publication, in order to mitigate the damage which they have caused, as well as discipline meted out to Tapper and Costas, we reserve the right after five (5) days to sue Tapper, Costas and CNN pursuant to Florida Statute 770.01 for damages well in excess of $450,000,000 dollars which includes compensatory, actual, special and punitive damages.

Klayman also attached a separate letter to Michael Bloomberg and journalist Erik Larson which read, in part, “…on behalf of Mr. Reed, his family, friends and colleagues, I demand that you immediately take this article down, issue a public apology and severely discipline the reporter Erik Larson, who has endangered lives and most likely is in bed with the PGA Tour, as part and parcel to its anticompetitive acts.

“If there is no immediate retraction, apology and severe disciplining of Mr. Larsen, we reserve the right to sue you, Mr. Larson and Bloomberg L.P. and related business entities after five (5) days.

Golf fans are getting quite a kick out of Patrick Reed’s latest legal maneuverings.

Patrick Reed is the biggest clown 🤡 the sport of golf has ever seen. Just an insufferable cheating fool. https://t.co/rYwMdCmGrY

“Patrick Reed is the softest person in history,” commented another.

Man I’d love to be this guys lawyer, the frivolous billable hours are endless. Just watching hours of old golf broadcasts waiting for someone to say Patrick Reed hit a bad shot. https://t.co/gczgrnMHGH

“Patrick Reed is going to start suing people who like mean tweets about him,” joked another fan.

Patrick Reed is suing CNN for $450mn, and demanding an on-air apology within 5 days or he moves forward with the lawsuit.

“What if Patrick Reed went to LIV solely to finance all these lawsuits?” another fan asked.

UPDATE: CNN has responded with a statement…

“This is a frivolous lawsuit, whose aim is to chill free speech and intimidate journalists from covering important stories about the Saudi government and the Saudi-backed LIV golf tournament. CNN will aggressively defend its reporting, which did not even mention the plaintiff in its coverage.”