The Patriots’ 2017 Trade For Brandin Cooks Was Reportedly To Build Around Jimmy Garoppolo, Not Tom Brady 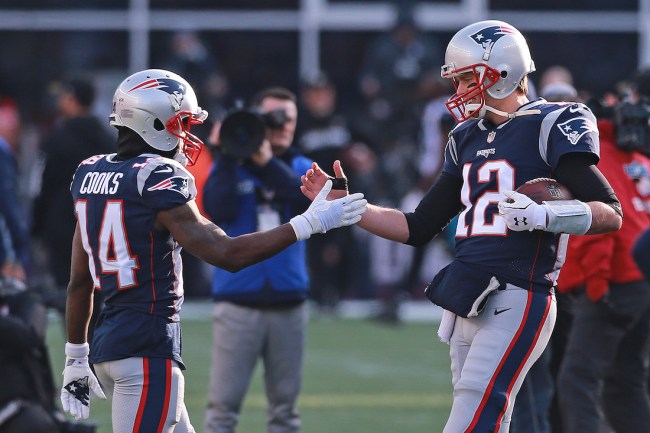 Remember when the Patriots had Tom Brady as their quarterback? Obviously, as the two sides only parted ways last March. But after seeing the GOAT lead the Buccaneers to a Super Bowl 55 title this NFL season, one has to wonder if Bill Belichick and his buddies in New England have a little bit of regret for not trying to do anything they could to make things work with their 43-year-old signal-caller.

We’ll probably never get the answer to that, but we do know that the Patriots were already trying to push Brady out the door way before 2020. In fact, reports surfaced all the way back in 2017 that the team was seriously looking to trade the future Hall of Famer to build around backup Jimmy Garoppolo, with Belichick fearing Brady was on the decline. So, how’d that work out?

Brady went on to win the 2017 NFL MVP, the Patriots won the Super Bowl during the 2018 season and, well, yeah, the idea that the GOAT was going anywhere was quashed. And while it eventually happened a couple years later, a recent report from Albert Breer’s MMQB for Sports Illustrated details how New England was maneuvering to transition to Garoppolo during that 2018 season.

According to Breer, the Patriots traded a first round pick for wide receiver Brandin Cooks in 2017, believing the way he could stretch the field would fit well with a gameplan better suited for Jimmy G. Instead of seeing Brady take a step back, he thrived, and it led to Garoppolo getting traded in 2017. Take a look at Breer’s details below.

Speaking of the Patriots’ rebuild, I think Belichick’s actually been forthright in saying things went sideways when Brady found a way to maintain his level of play. And my smoking gun in the whole thing is Brandin Cooks.

My understanding is Cooks was initially acquired, in 2017, as a piece for Jimmy Garoppolo, not Brady—with the feeling being that the Patriots would play more of a downfield game once Garoppolo became the quarterback, presumably in 2018. And that played out. Cooks was a good player, but a bit of an awkward fit for Brady stylistically in 2017. Brady, for his part, didn’t drop off, even a little.

That year, he was the NFL’s MVP. That, of course, hastened the trade of Garoppolo to San Francisco and, months later, the trade of Cooks, who simply didn’t carry the same value to the team that he would’ve had the team morphed its offense to what Garoppolo did well in 2018.

Beyond that story just being an interesting one, it also shows how Brady’s play wound up bastardizing the rebuild a little. At that point, the Patriots were older, and had a bunch of heavy contracts tied to those players. With Brady proving he could still win championships, the expected rebuild got pushed back a year, then, after Brady won his sixth title in 2018, two years.

Eventually, the dam did break. But the Patriots got another ring out of it, with the downside being the contract debt they built up in keeping those teams together (also, drafting well could’ve solved some of this, and the Patriots didn’t draft well). And while it was a zillion percent worth it, the Patriots did pay the price in carrying around $30 million in dead money last fall. Now, with the books clean, we get to see if Belichick can build back what he initially expected to build back two or three years ago

It’s wild to look back and think that the Patriots were trying to push Tom Brady out the door years ago, especially after seeing what he did this season with the Buccaneers. Hell, it’s wild that New England would want to get rid of Brady at all considering he’s the GOAT. But, you know, things like this happen in sports, and egos and all that stuff gets in the way

As for Brandin Cooks, he had a 1,000-yard season with Brady during his lone year in Foxborough, then got shipped off to the Rams for a first round pick after Jimmy Garoppolo was traded. It’s one of those deals that worked out for Belichick, but, at the time, no one really knew why the receiver lasted just one season. Now, Breer sort of gives a little bit of insight.

With an expected wild NFL offseason approaching, could Belichick bring Garoppolo back in a trade? Who knows, but it might be something the greatest coach ever actually explores considering his love affair with the guy.