Per Report, The Patriots Have ‘Kicked The Tires’ On Bringing Back Antonio Brown 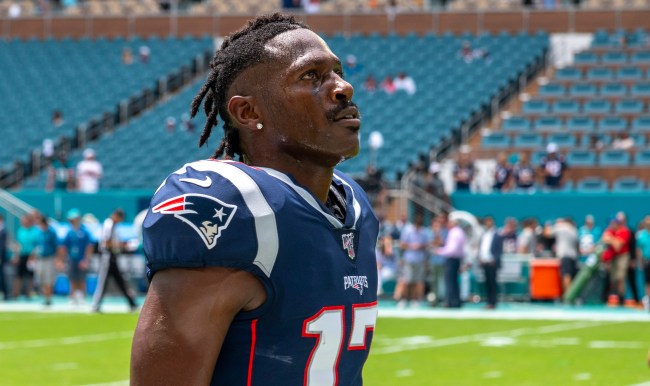 Just 62 days ago the New England Patriots released Antonio Brown, but now there are reports that the team may be looking to bring him back as a weapon for Tom Brady.

Seriously, there seem to be legitimate reports out there from WEEI out of Boston that the tires have been kicked on this idea.

Per @WEEI @christianfauria, the #Patriots have "kicked the tires" on Antonio Brown. Says there have been discussions about the player.

The #Patriots have had discussions about free-agent WR Antonio Brown, per @WEEI

Brown played in just one game with the Patriots this season after being signed by the team on September 7th. He hauled in four passes, including a touchdown, on eight targets during New England’s 43-0 win over the Dolphins.

As you probably know, the last couple of months have been a whirlwind when it comes to Brown, the NFL and his future (or non-future) in the game of football.

In the most recent developments, Brown issued an apology to Pats owner Robert Kraft. This jumpstarted a rumor mill that perhaps the wideout was looking for a way back into the league and more specifically, a second chance with the Patriots.

Brown also posted the apology on his Instagram where Brady, and a number of other Patriots, liked the post. This set social media ablaze as the rumors continued to grow that maybe even Brady wanted him back on the team. After all, the New England offense has somewhat struggled for a chunk of the year and Brown is a seven-time Pro Bowler after all.

As all of this was unfolding, former NFL linebacker LaVar Arrington was on ‘Speak For Yourself’ claiming that he was convinced Brady was the one that actually told Brown to apologize to Kraft and that the whole thing is based around Brady wanting Brown back in New England.

"Tom Brady told him to send that tweet out… Tom Brady is lobbying to get AB back on this team." pic.twitter.com/pgqCdmh3ai

The Antonio Brown rumor mill truly is a beast that never sleeps. Each and every day something new comes about from either somebody else accusing him of something or he himself jumping on social media causing some sort of chaos.

At the end of the day, regardless of how Brady and his offense have looked over the last couple of weeks, New England’s passing offense still ranks eighth in the NFL. Sure, bringing Brown back would immediately improve that wide receiver group on the field, but it’s unclear whether that’s worth the baggage he may bring off the field.

Plus, there have also been reports of him not turning over all of the evidence in his alleged sexual assault investigation which could keep him out of the NFL regardless.