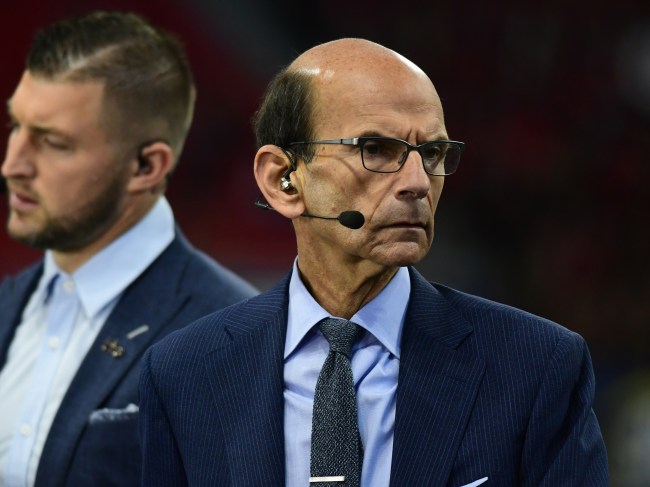 Paul Finebaum has the nickname “The Mouth of the South,” so it’s always safe to assume that the longtime college football analyst will speak his mind when it comes time to talk about the sport. And, given the fact there’s a helluva lot of uncertainty about the future of sports in 2020 (and, possibly, beyond), Finebaum couldn’t help but weigh in on some of the ideas being tossed around right now.

At the moment, there’s a lot of talk that college football might be willing to play games without fans in order to salvage its season — although some leaders were adamant about that being a possibility. While that’s nothing more than hearsay because nobody knows what the hell might happen between now and September when the season’s planned to start, it’s an idea that’s being hotly debated by head coaches and analysts, all offering up their suggestions on how to stay safe during this unprecedented pandemic and still try to play sports.

We’ve seen guys like Chris Fowler throw out three scenarios he thinks could work. We’ve heard from Kirk Herbstreit about why he doesn’t foresee the college football season being played. And even college football head coaches and athletic directors are getting in on the action, with many voicing either realistic plans rather than optimistic ones. Now you can add Paul Finebaum into the mix, because the guy had an impassioned statement about any games being played without fans in the stands.

Appearing on ESPN’s Get Up on Thursday, Finebaum didn’t mince words about his thoughts, even going as far as saying “it would be the end of college football as we know it” should the NCAA make the decision to play games with no fans. Take a look below at what he had to say.

"I think it would be the end of college football as we know it … from what I hear, I do not believe college presidents and commissioners would go for this."

—@finebaum on the possibility of college football being played without fans pic.twitter.com/znWfseD7TO

“I think it would be the end of college football as we know it. I don’t think it will happen, but if it does, it would further shatter this myth of intercollegiate athletics being amateur,” Finebaum said. “From what I hear, I do not believe college presidents and commissioners would go for this.”

That’s quite a bold prediction from Paul Finebaum, and one that makes you wonder if it has serious validity to it, or just something that college football fans wouldn’t even care about whenever “normal life” returns. Sadly, we all know that universities are already making bank off of student-athletes, so why would blatantly selling out now by playing games in an empty stadium for the sake of money from TV deals change anyone’s perception about the sport? I’m not sure it would — even though it probably should.

It’s being reported that public universities in the five biggest conferences in college football could lose over $4 billion in revenue by themselves, so the NCAA is itching to play games in pretty much any way possible.

This is ridiculous. Fans will be there as soon as they're allowed, no matter what happens between. Ow and then.

Let’s just wait until it’s safe for EVERYONE

I am a huge Paul Finebaum fan but I think he’s incorrect on this. The fact is the end of the College & University total ownership of Player rights is already near. This might be a hastening of that, but “cheapening” College Football is simply not correct.

Always has been. Always will.

The safety of the players and coaches should be the only thing that matters to the NCAA and the universities right now. And, although we all want this thing to be over and just hope that college football can be played with fans like it always has been, doing so needs to come with the approval from experts. The last thing anyone wants is for an entire college football team to be infected with the virus, then travel back to campus and all around the country putting others at risk — even if it means football in the fall and more money in the pockets of universities for whoring out their unpaid athletes.