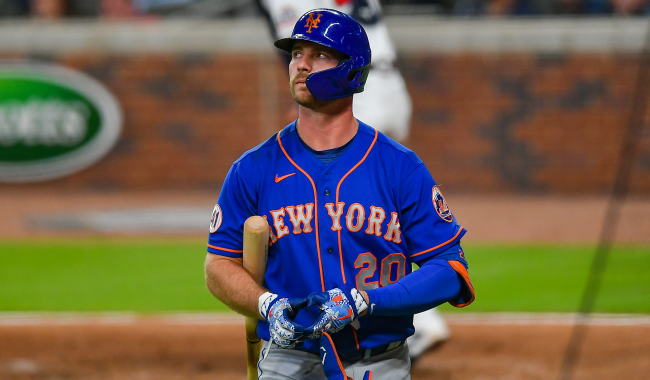 For several years now, Major League Baseball players and fans have been talking about the growing use of illegal substances by pitchers in the game.

Everyone got sidetracked for awhile in this discussion by the Houston Astros cheating their way to two World Series, winning one, and that whole pandemic thing wiping out most of the 2020 season, but today it’s the number one topic of conversation when it comes to Major League Baseball.

This past Tuesday, one of the people long suspected of using a foreign substance on the mound, Gerrit Cole, all but admitted that he uses the sticky stuff to gain an edge after his spin rate dropped dramatically in his last start.

Cole’s lower spin rate just happened to coincide with Major League Baseball claiming it was about to start cracking down on the use of substances like Spider Tack.

One player, however, a hitter in fact, Mets slugger Pete Alonso, is looking to change the narrative.

Alonso, who set a rookie record in 2019 with 53 home runs, says he is less concerned with pitchers using the sticky stuff and more with a conspiracy in which he claims Major League Baseball is secretly changing the baseballs to lower the amount of money the top players receive in free agency.

“I don’t care what they use,” Alonso told the media on Wednesday.

Alonso went on to say, “I think that the biggest concern is what Major League Baseball manipulates the baseballs year in and year out depending on the free-agency class or guys being in an advanced part of their arbitration. I do think that’s the big issue. The ball being different every single year. With other sports, the ball is the same. Basketball, football, tennis, golf — the ball is the same. That’s the real issue with the changing of the baseballs.

“Maybe if the league didn’t change the baseball, pitchers wouldn’t need to use as much sticky stuff.”

Wait, what? Is that something players talk about?

"Oh, no, that’s a fact. Yes, guys have talked about it," Pete Alonso said, citing the 2019 pitchers (juiced ball) and this year's hitters (deadened ball). "It’s not a coincidence. It definitely is something that they did."

Related: Trevor Bauer Fires Back At Speculation He Was Doctoring Baseballs After They Were Sent To MLB For Inspection

Whether that is true or not (and don’t think the powers that be in Major League Baseball are above doing such a thing), it just goes to show how much MLB players distrust the leaders of MLB (and rightfully so).

Pete Alonso posits that MLB changes the baseball based on free agent class:

"That's a fact. In 2019 there was a huge class of free agent pitchers…it's not a coincidence" pic.twitter.com/OnRHmFAxBf